From MicrasWiki
(Redirected from Prætor)
Jump to navigationJump to search 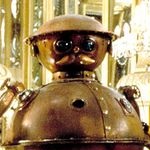 Nicholas Raglan, a Yardistani, is known as first 'speaker' (an ancient, but nowadays obsolete, term to refer to the Prætor).

The Prætor has a wide variety of duties, functions and powers which are derived from tradition and custom, the Charter, the Procedures of the Landsraad, the Lawbook, and several other legal documents. 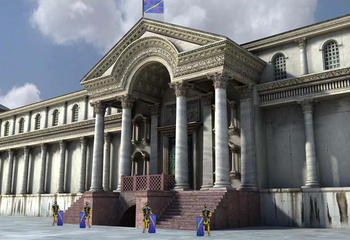 The Frontgate of the Palace of Zirandorthel, the seat of the Landsraad.

No vote may be cast by the Prætor unless to break a tie. Similarly, any of the deputy prætors is not allowed to vote when presiding over the Landsraad unless it is to break a tie.

The Prætor is also charged with maintaining appropriate decorum on the Floor of the Hall of Oratory of the Palace of Zirandorthel as well as elsewhere in the aforesaid palatial complex, or whereever the Landsraad decides to assemble in accordance with law, and has the power to suspend or expel Electors who breach decorum. Zie is also responsible for maintaining order and security on the premises of the Palace of Zirandorthel or the lawful temporary ad hoc meeting place of the Landsraad.

Other legislative responsibilities of the Prætor are maintaining the Hanzard of the Landsraad and keeping the Charter as well as the Lawbook up-to-date.

The Prætor is the custodian of the Seal of the Landsraad. The aforesaid seal is used not only for legislative, administrative and representative purposes, but also ceremonially, when it is put, together with the Golden Gavel, into the custody of a new Prætor as part of the customary installation procedure.

The Prætor also ensures that the text of each Treaty, Bill or Resolution which has been passed by the Landsraad is written down on fine vellum adorned with the coat of arms of the Landsraad as well as such decorations as initials, borders and miniature illustrations drawn with gold, silver and vibrant colours.

It is incumbent upon the Prætor to represent the Landsraad before the Kaiser, the Imperial Judex or other court of law, and before any other body or authority if so necessary. The Prætor also receives dignitaries, both foreign and domestic, who are visiting the Landsraad as well as other guests of Landsraad.

The Officers of the Landsraad include, but are not limited to, the Greffier, the Cudgeller-at-Arms, the Architect, the Seneschal, the Counsel, the Historian, the Parliamentarian, the Castellan, and the Chaplain. The Prætor may, by ancient convention, appoint and dismiss at pleasure any of these officers.

The Prætor may, by ancient convention, appoint such employees to the Prætorum as he considers necessary for assisting him in the discharge of the functions of the Prætorship. The aforesaid staff is appointed at such remuneration and on such other terms and conditions as the Prætor may determine.

In the event of the unannounced absence of the Kaiser for a period exceeding 7 days and the Stewardship being vacant, the Prætor conducts the government of the Imperial Republic of Shireroth with the Prætor having the same powers as a Regent until the Landsraad has elected a Regent.

The Prætor has, by ancient convention, the legal right and obligation to - when he is in Shirekeep - reside in Prætor's House, the plush private apartments of the holder of the Prætorship. Prætor's House has a well-deserved reputation as one of the finest state apartments in the Imperial Capital.

There are several symbols which appertain to the Prætorship of the Landsraad. Some have been associated with the Prætor since time immemorial, others have become more recently symbols of the Prætorship.

The best-known Prætorial symbols are (the): 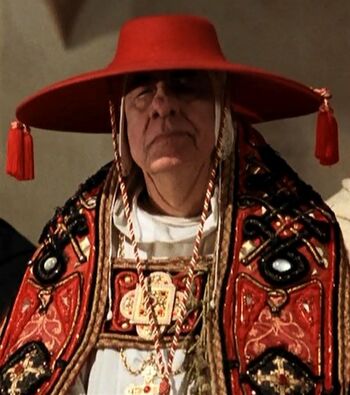