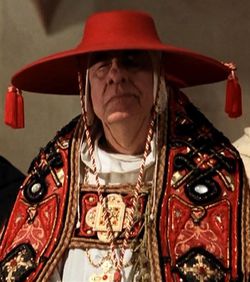 Scott of Alexander (Prætor in 1512), having donned the infamous prætor's hat.

Scott of Alexander, born in Alexander, Apolyton, and naturalised in Raikoth, was a Boreal and Shirerithian statesman, historian and philosopher. First duke of Elwynn (1452–1470, 1471–c.1474) then Baron then Duke of Hyperborea (circa 1475). Secretary and Adviser to Kaiser Los I of Shireroth. Prætor of the Landsraad of Shireroth, 1512.

A ruthless politician who encouraged Shireroth's expansion through the indiscriminate annexation of failing states, whilst maintaining an outward air of benevolence. As Baron of Hyperborea Scott was, along with Zirandorthel, responsible for encouraging the Babkhi under Ardashir I to settle in Elwynn in the hopes that they might destroy the legacy of Mari Greenwood and leave Elwynn sufficiently weakened and divided as to be unable to resist a full takeover by the Raikothin of the Duchy of Hyperborea.

Scott's great rival for power in Hyperborea was Kalir Sethan who would eventually lead Hyperborea away from its Apolyton heritage towards a distinct, indeed peculiar, nativist ideology and culture that would ultimately become known to the world as the strangeness that was Raikoth.