Claims of New Batavia on Micras

The Islamic Republic of New Batavia is the successor state of the Virtual United Provinces, the Republic of the Netherlands and the Islamic Internet Republic. The nation was founded in 2007 and became involved in the Micras sector in 2009. 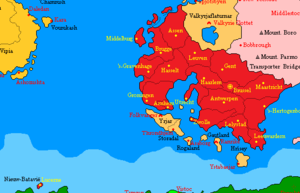 Claiming land on Micras was an important position of the leading party Fresxa Komenci under the administration of prime minister Nihill Romez. The nation originally claimed under the name "Republiek der Nederlanden". This claim was accepted on September 21, 2009. The claim was made by then Minister of Finance Max one day before. On June 24, 2011 the name was changed to "Islamitische Internetrepubliek" at the request of Frans following the Islamic revolution.

The IRP-lead government went into exile on July 4, 2011. The claim on Micras was forcably removed on December 1, 2011. 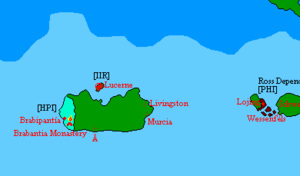 The Government-in-Exile reclaimed the island of New Batavia in order to resettle and restore the Third Republic and regroup the exiles. The claim was accepted on October 31, 2020. 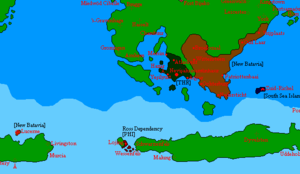 After the restoration a new claim was made to resettle lands on the continent of Corum. This claim was accepted on December 1, 2020. The nation's name was also changed to Islamic Republic of New Batavia.