The 2012–13 Gerenian League 1 was the inaugural season of the Gerenian League 1. The First Championship was contested by six teams between August and October 2012. The Second Championship began in January 2013, with eight teams taking part in the competition, as the league was expanded at mid-season. 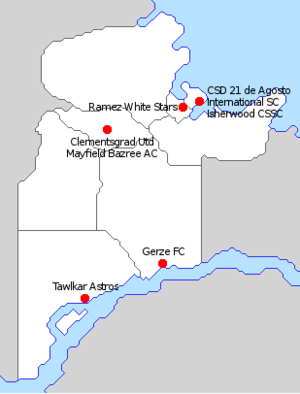 Due to Gerenia entering into the Four Nations, the Gerenian Football Association decided that the teams competing in the Second Championship were playing their rivals only once. This was to avoid having a very tight schedule.

The finalists Isherwood CSSC and Clementsgrad United qualified for the 2013–14 AEFA Champions' League.

The Season Table determined the teams being relegated or playing the promotion match. For this season only, relegation was based on an average system. Neither the Championship nor the Season Finals matches counted for the table.

The Season Final consisted on a single match held in a neutral venue, determined by the Gerenian Football Association.

Tawlkar Astros faced Port Isherwood Hurricane in the play-off. The matches were played on 12 March and 19 March 2013.