KSP 21 De Agosto (English: August 21st Sport and Social Club) was a Gerenian football club based in the city of Port Elerat, which competed in Gerenian League 1. The manager was Ismael Kaprari and the club played its home matches at the Estadio 13 De Noviembre (English: Thirteenth of November Stadium).

21 De Agosto was founded by members of the Spanish-speaking community of Port Elerat in 2012. The club was named after the date of reform of the Constitution of Gerenia (21 August 2012). Soon afterwards, and thanks to the increase of the number of Gerenian clubs, 21 De Agosto joined the Gerenian League 2 for its very first season. The team finished second in the Stage One, having lost only one match, and eventually obtaining impressing results (5–2 to KZ Uzenaie Mergeaze'es, 4–1 to Taizun Optimistid). In those days, it began being said that 21 De Agosto "drilled" their opponents' defence, with midfielder Oskar Silistra (a former ironmonger) leading the team. Thus, 21 De Agosto earned the nickname "The Drill". The Drill was promoted to the League 1 at mid-season, as the league was expanded from six to eight teams. Their experience in the top league was brief, since they were relegated at the end of the season. However, after one season in the League 2 (in which they were runner-up), the club returned to the top division. 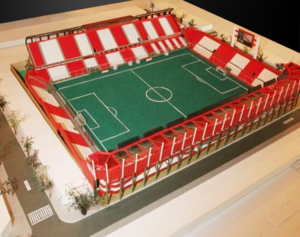 A model of the Estadio 13 de Noviembre

Until the Estadio 13 De Noviembre was built, 21 De Agosto played their home matches at Glaxo Sports Complex. The building costs (estimated in 25,000,000 GSR) were covered by the Ministry for Sport of Gerenia, as well as by donations made by enterprises and supporters. The stadium, located in the southern Port Elerat suburb of Seerom opened on January 2014.

The stadium was named after the planned date of opening (13 November 2013), and in commemoration of the Great Fire of Port Isherwood, the city's biggest fire of its entire history. 21 De Agosto's supporters call themselves "Thirteeners" by reason of the ground's name.