The 2013–14 Gerenian League 1 was the second season of top-tier football in Gerenia. Isherwood CSSC, the defending champions, managed to obtain a second title. The season started on 2 August 2013 with eight teams taking part in the competition.

The league had a eight-team circuit like the 2012–13 season. 2013 League 2 champions Glaxo Academy FT were directly promoted.

Tawlkar Astros finished the 2012–13 season in seventh place and were therefore required to compete in a two-legged promotion/relegation play-off against League 2 runners-up Port Isherwood Hurricane. The Hurricane won the play-off 7–4 on aggregate and therefore were promoted to the League 1. 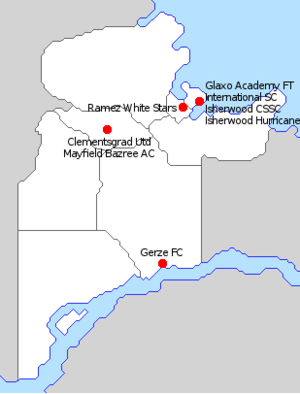 Since Isherwood CSSC won both the First and the Second Championships, the season title was automatically awarded to them, and no final match was played.

Port Isherwood Hurricane qualified for the Promotion/Relegation play-off against CSD 21 De Agosto, the second-ranked club of the League 2.