From MicrasWiki
(Redirected from Francia)
Jump to navigationJump to search

Arbor, officially the Emirate of Arbor (Arboric: إمارة أربور), is a sovereign nation in southeast Keltia. It is a hereditary monarchy consisting of three geographical regions separated by the Eastern Ocean. The capital is Al-Hamra, located on the largest island of the Arbor Isles.

The nation sees itself as a continuation of the earlier Kingdom of Amokolia and the Frankish Empire. Moreover, the population consists for the most part of fugitive citizens of Arcadia, Francia, Helderbourgh and Stormark. As a result, the country is multi-ethnic and multicultural, dominated by an ever-growing fusion of cultures into a common Arborish culture. This is expressed in a common language, Arboric, and conversion to a new religion, Craitism.

Although Al-Hamra is the official capital, many public institutions are located in Madinat al-Fath. This has to do with the strict class policy. People who are recognised in class III are allowed to enter the capital, which means that part of the population has no access. In order to make public institutions accessible to all classes, they are located in Madinat al-Fath.

The name "Arbor" was given to the archipelago during the Storish era. The name is Catologian for 'trees', referring to dense forestation on the islands. With the foundation of the Emirate that name was used for this new state. The name has been transliterated in the Arboric into 'arbur (أربور). 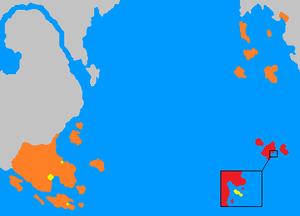 Since the foundation of the emirate, the country has pursued a strict isolation policy. This had to change when a large expansion of territory took place in 1686 AN. The government of the emirate changed the policy to three layers of accessibility:

Class I: With a simple visa and Livists can stay in limited areas. For a visa there is a maximum length of stay of three months, after which one has to leave the country for at least one month. Livists must be in quarantine for at least two weeks on arrival, wearing an ankle tag during their stay and on their clothes a visible yellow sign consisting of an Arboric letter "lām" (ل). If Livists are found outside the restricted areas, they can be expelled immediately and a permanent ban on entry to the country.

Class II: A visa allows citizens of approved countries in this class to visit large parts of the emirate. Only the Arbor Isles, except the island of Jazirat 'Uwyastar, cannot be visited. Exception is for diplomats who have to successfully pass the Gate of Justice.

Class III: Only believers in the Craitgod from approved countries can get a visa for the whole emirate. The visa is marked with a red crescent moon, but when granted one may be asked to pray in the Dome of Peace and pass through the Gate of Justice.

Since its expansion in VIII.1686 AN, the emirate acquired a greater diversity of geography. Roughly speaking, it is divided into three geographical regions:

The Arbor Isles, Juzur 'Arbur (Arboric: جزر أربور), are seen as lone and mysterious islands on Micras. Previously, the archipelago was known as Terra Firma. There are three main Arbor Isles, surrounded by many smaller islands. Of those smaller islands, the island of Jazirat 'Uwyastar the well-known. This island is artificial to provide sufficient space for the international airport and port.

Area and boundaries of the Arbor Isles:

The landscape of the islands is characterised by woodlands, almond trees, fertile plains and often dramatic coastlines with sandy coves separated by craggy cliffs. The highest peak of the islands is Dhurwat Ardiat Thabita (Arboric: ذروة أرضية ثابتة): Peak Terra Firma, located on Jazirat al-Musawa. The mountain is 1,445 metres high on the north side of the island.

Overview of the three main islands:

The easternmost of the three main islands, Jazirat Al'ukhua, lies 768 km west of South Island of the Keltia continent.

Isles of the Fortunate and North Island

Isles of the Fortunate

Area and boundaries of the Isles of the Fortunate:

Area and boundaries of the North Island:

The area of Arbor on the continent of Keltia has so far no separate designation, but is often called the al-Manatiq al-Gharbia (Arboric: المناطق الغربية): western territories. In addition to a portion on the continent, the area also includes the coastal islands.

Area and boundaries of the Western Territories:

South of the Red Mountains lies a fertile coastal strip, Qitae al-Bahr (Arboric: قطاع البحر): Sea strip, with many ports. This has become one of the most urbanised and densely populated areas of the western territories. The Eastern Red Mountains reach to the sea, to the south-easternmost cape marking the formal boundary between the Sea of Storms and the Eastern Ocean.

The Red Mountains also form the monsoon border. The annual rainy season, the monsoon (Arboric: موسم), remains south of the mountain range. This means that there is almost no rain north of the mountain range, only wadis (Arboric: وَادِي‎) are filled by the monsoon rains. The interior is therefore a desert area, where oases can be found here and there. Summer storms in the sandy desert can cause heavy sand and dust storms, which even blow the sand over the Red Mountains on the coastal strip.

Off the coast are several islands, the largest of which is Mayurqa (Arboric: مايوركا): large island. The sea between the islands and the mainland is called al-Bahr al-Mutawasit (Arboric: البحر المتوسط): Middle Sea. Despite the great connections with the Sea of Storms and the Eastern Ocean, the coasts of the Middle Sea enjoy a Mediterranean climate. This is due to the fact that the ocean currents pass east and south of the coastal islands. The rise of the monsoon cools the warm climate and brings much needed rain. The Middle Sea is relatively shallow, so the sea is rich in coral reefs.

Overview of the largest islands, from west to east: