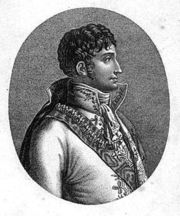 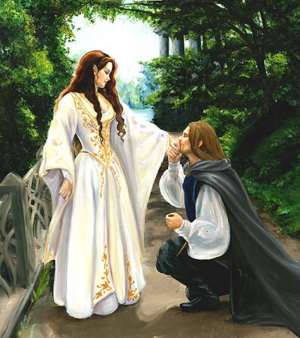 The marriage proposal from Arkadius to Ærinndís

Arkadius Leopold des Vinandy (Vinandy, 1502 - Amorica, 1565 AN) was king of Batavia from 4 Herfstmaand 1520 AN to 2 Wintermaand 1565 AN. He is known as Arkadius I and Arkadius the Beloved. Arkadius was married to Ærinndís des Vinandy - Ettlingar Freyu, two daughters were born from this marriage:

With the (fictional) death of Queen Faya I and the reconstruction of the country, the Noble Government was looking for a new King. Arkadius was chosen by this government.

The reign of Arkadius I was characterized as a period in which crisis after crisis finally caused the Kingdom to collapse. However, an important foundation was also laid for the later and more modern Batavia. His interference and performance in the Dietse Uprising was initially blamed on part of the population, but as time went by it became increasingly grateful to him.

The Van Haltna Crisis in 1522 AN, turned out to be disastrous for Batavia. Attempts to turn the tide hardly helped because of a lack of decisiveness, willpower or division in one's own ranks. Soon the entire politics and then society collapsed. The King was then forced to leave the country. The throne would be vacant for almost a year. That period is also referred to as the Davignonrepublic.

Reports from the then Lord Chamberlain, Wimmepenck, show that the King first returned to Vinandy. When the order there too was disrupted by armed gangs, he had to flee. He left for Gasconje with his wife and daughter. Arkadius became ill and despite good care, he died on 7 Zomermaand 1565 AN. He was buried in a small grave in La Roche-Derrien.