The Gascony War (Dutch: Gasconiaanse Oorlog) was a Recwar which erupted in the Gascony region of North-Western Benacia on August 3rd 2009 after an unexpected attack on the Batavian port of Zeehuysen. Batavia had for several weeks entertained the idea of annexing the lawless and remote Gascony colony after its breakdown in communications with its inactive owner the Kingdom of Bosworth, and rebel activity in the region had given Batavian leaders some cause for concern. This reached an impasse with the kidnapping of Batavian monarch Fränzi-Ferdinand I, and finally the Gascon rebels' attack on Zeehuysen. For several weeks fighting in the Gascony War and Amokolian War occurred simultaneously.

The conflict pitched the combined forces of Batavia, Stormark, and Alexandria against the Gascon Revolutionary Army, supported by the Republic of Antica.

On August 3rd 2009, Batavian naval forces on manoeuvres near the small port of Zeehuysen, on an island off the coast of the Batavian province of Ingelsburg, detected a large unidentified enemy force approaching Batavian sovereign territory, along with a small fleet of submarines which by 10 AM that morning had sunk two Batavian battleships and one cruiser, severely damaging Batavian airforce hangars and runways near the port. Jeroen van Veen and Constantin Windsor emerged as strong Batavian leaders after this unprovoked attack and were able to sink two enemy aircraft carriers. Batavia had won the first conflict but the enemy forces, by the end of the day identified as the Gascon Revolutionary Army, had begun to regroup. The attack on Zeehuysen was the trigger of a larger conflict to start in Gascony proper, and alerted Batavian politicians of a situation which was rapidly deteriorating in the remote border regions of their country. 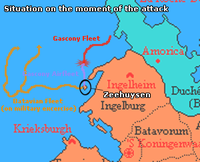 Map of military manoeuvres during the Zeehuysen Raid

On August 12, 2009, after several minor bombing runs, Batavian Forces attacked Gascony. The three main army divisions advanced quickly and captured key towns and strategic points. By August 24th, the cities Amorica, Beauharnais, Sable d'Or, Marsannay and Girond were all in Batavian hands. Dantes and La Roche-Derrien remained unoccupied and were important centres of resistance for the Revolutionary Army and their Antican allies. However, the same day, trouble brewing in Keltia forced the Alexandrian naval contingent to return back to their homeland, weakening the Batavian allied forces. These two cities, most importantly the Gascony capital of La Roche Derrien, were assaulted numerous times by the Batavian forces but still held out. Nevertheless, the timely arrival of auxiliary troops from Stormark and strategic bombing raids on the defences of the city by the Batavian Airforce resulted in Duke Jeremy of the Gascony Revolutionaries surrendering to the Batavians on September 10th. A counterattack by the Antican forces of General Octavius, supporting the Gascon rebels, failed to divide Batavian armies besieging the city and on September 11th the Antican forces surrendered, leading the way to a full surrender of all Gascon and allied troops on September 12th.

Bosworth was ejected from Gascony and therefore the entire continent of Benacia and the Gascon region was divided between Batavia and Stormark, under whose rule it remains at the time of writing.