The foreign relations of Calbion are a reflection of the status of the country as independent and sovereign. As such, Calbion has found itself swung between alliances and power blocs on Micras throughout its history. Present foreign affairs are conducted by the Calbain Government, either through the Governor-General's office, or through the office of Foreign Affairs. Maintaining Calbion's independence, cultural identity and ensuring international free trade are the primary goals of Calbain foreign policy. 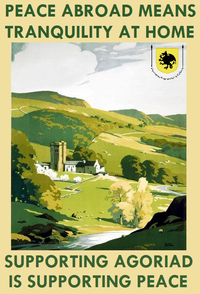 A government-issued propaganda poster from 1691, aimed at gathering support for the policy of Agoriad

Throughout its history, Calbion has seen several conflicts with neighbours such as Alexandria, Natopia and Jingdao due to the nation's insistence on an independent course between the main alliances on Micras. Notable conflicts incluede the Tractor incident, the Calbain Independence War and the Second Euran War. Although the nationalist government that ruled Calbion between 1685 and 1688 made some steps to establish relations with neighbouring countries, and the governments led by Llywelyn Lewis in the first half of the 17th century also displayed liberal characteristics, the incumbent conservative and realist government rejects international participation as a principle. Especially during the first years of the ab Ioan government, Calbion's foreign policy was characterised by a deep mistrust of the intermicronational community, and a focus on self-reliance in an anarchic, unreliable world. Rising concerns about the influence of Raspur-backed criminial enterprises on Cibola have adjusted Calbain foreign policy somewhat. Calbion attempted to establish some cooperation with USSO nations, which did not result in anything constructive. Thereafter, Calbion started to increase its diplomatic ties with other non-aligned states. In 1691, Governor-General ab Ioan officially declared isolation to be over, and announced the new period of "Agoriad" or opening of relations towards others. In that year, Calbion signed treaties with several neighbours.

The Calbain government however distinguishes three groups of nations. The categorisation of these nation is mostly done because of reasons of opportunity. For instance, Natopia is widely regarded as a "cultural and historical enemy" of Calbion, but nevertheless remains classified in the Cymdogion category due to its regional influence and proximity.

The largest group is that of Y Lleill, nations with whom Calbion refuses any contact. Citizens of countries from this group also may not apply for visa and will be deported when attempting to cross the border. A second group of nations is known as the Cymdogion, these are nations that Calbion recognises as having some importance for the nation, but with whom the Calbain government does not have any official relations. Citizens from these countries may apply for visa, and diplomats may be allowed entry. States that fall in the category of Cymdogion are: Alduria-Wechua, Craitland, Mercury, Natopia and Shireroth. In addition, citizens from the Batavian region of Kasterburg may apply for visa, as well as citizens from Northern Elwynn. Thirdly, there is a category known as Gweddus. These nations are recognised as potentially decent. Though no diplomatic relations will be established, unofficial contact between these nations and the Calbain government may occur. Citizens may also apply for visa. Lastly, there is a group of friendly nations with whom Calbion has official relations through treaties. These are New Batavia and Nova Caradia. The Kingdom of the South Sea Islands, which is also in this category has informal friendly relations with Calbion.