Llywelyn James Lewis was a prominent political leader of Calbion, instrumental in the development of the young Calbain nation. He was the longest serving Governor-General of the nation. Throughout his life, Lewis displayed a strong loyalty to the cause of Calbain nationalism, and fought hard to establish a free and democratic Calbion. He gained respect from all sides of the political spectrum and led both nationalist and realist governments throughout his life. Lewis was instrumental in the development of Calbion's democratic and civic institutions, and was a proponent of autonomy during Brettish rule. Lewis chaired five governments as Governor-General, from 1610 until his death in 1667. The last twenty years of his life, Lewis lived in the Skerry islands, chairing a government-in-exile.

Llywelyn Lewis was born in the village of Gwynneth in central Calbion in 1580, during the late Nelagan period. Lewis' mother had been killed during the Jingdaoese-Calbain war among with many other members of the Calbain community who were massacred by the Jingdaoes forces. Lewis' father survived the slaughter and formed, together with other survivors the Ymwrthedd Calbain movement (Calbain Resistance). In 1604, Lewis moved to the city of Augdyn where he became a lawyer. This was a time of great turmoil for the nation, with Maraguan forces attempting to establish their own nation.

Soon after, Lewis became affiliated with politics. He founded Plaid Calbinol, a political party which was founded to re-establish the Calbain state. Lewis used his position to defend the rights of the Calbain. He rejected the violent uprisings in Faenor but said he 'understood the distress'. During this time, Lewis worked hard to reestablish local Calbain communities. 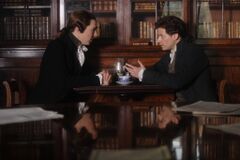 Llywelyn Lewis and Prince Jack I, the two men instrumental in the creation of the modern Calbain state had a close relationship

In 1608, Lewis became minister of Foreign affairs in the Sherrinford government. As the nation was still struggling, Lewis and the government aligned itself with the Commonwealth of the Brettish Isles, of which Calbion became an autonomous protectorate. In 1610, Lewis became Governor-General. During this time, Lewis established democratic institutions, including an elected Cynulliad Cenedlaethol, which was modelled on the Brettish parliament.

In 1623, Lewis made a proclamation that after 15 years of Brettish rule, it was time for Calbion to become independent, and moved to change the relationship with the Brettish into a relationship of equal and sovereign nations. He won a massive majority in the first democratic elections held in Calbion. During his second term, Calbain independence was formalised. In the subsequent elections, held in 1636, Lewis again won a majority. Following the Second Euran War, Jingdao attempted to assert its control over Calbion. Thinking he could accomodate the Jing, Lewis proposed to make Calbion an autonomous province. He later would call this "the biggest mistake of his life". In less than two years, Jingdao established direct rule, causing Lewis and the entire Calbain government to go in exile on the Skerry islands, where Calbion had the former colony of Port Impregnable. A rump state known as New Calbion was established. Lewis continued to serve as Governor-General until his death in 1667. His ashes were eventually placed in the St. Edward Catodral in Pentyre in 1685.