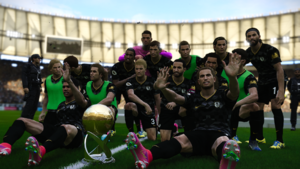 Dragonmoor FC celebrating their title win after winning 6-1 against Westlake Albion on the last day of the season.

The 2021–22 Super League Football season is the 4th season of Super League Football, the top professional association football league in Floria. After a two Conference style division system in the previous season, the league reverted back to one division. Playoffs to decide the championship were scrapped. Relegation was also reduced from four teams to three.

The season commenced on the 11th September 2021 and the season finished on the 4th June 2022. Dragonmoor FC are the defending champions after beating Longsight FC in the Championship Game the previous season. The fixtures were released on the 16th June 2021.

Twenty teams competed in the league – The top sixteen teams from the previous season and four promoted/expansion teams. The promoted/expanded teams were Havenbarrow City, Inter Alexandria, Real Alexandria and Wolfpine United. To make way for these new teams Birmingham United, Red Bear Newhedge CF, Ostville United and Northcliff Football Club were relegated in the previous season and were placed into the SLF Championship. After being known as "Town" since its establishment, Westlake renamed to Albion on the 16th June 2021. This is the second season in a row an SLF club has been renamed after Newmarsh Rangers renamed to Barkham FC in 2020.

Results can be viewed here.