The Democratic Republic of Sanama is a semi-presidential state located in southern Benacia. Founded in 1671 after the War of Sanaman Liberation, a part of the Kalirion Fracture, waged primarily by the Sanilla and Amarra Liberation Army for Democracy against various local warlords and remaining Imperial factions, the country has went through several political upheavals. Under the successor to the SALAD, the Sanaman Liberation Front, the area south of the Kortilhera Mountains formed a federation of 68 cantons. The large degree of autonomy enjoyed by each canton prevented the formation of a strong central government able to withstand outside and inside pressure. As a result the constitutional order was toppled in 1678 by Adalwolf Hiedler in the 1678 Sanaman coup d'etat, establishing a military junta. He was in turn deposed in the Lakhesis Incident in IV.1679 and democracy was reinstituted under the Second Republic. Sanama is home to the eponymous Sanaman people, as well as the Cisamarrese, Istvanistani, Passikaans, Babkhi and several other indigenous peoples. With its 120 million inhabitants, Sanama is the eighth most populous country in the world, and the fifth most populous in the Raspur Pact. In 1687, the country transitioned from a federal system to a unitary state, with extensive devolution to three autonomous countries: Cisamarra, Highpass and Thanatos.

The Sanilla and Amarra Liberation Army for Democracy declared independence on behalf of Sanama in 1671 as a consequence of the Kalirion Fracture. The Kalirion Fracture sent the local government into disarray. Years upon years of debauchery and excesses in the nobility had lead to a government in all but name. Fueled by the outrage of the working masses at the discrimination leveled against them by the bourgeoisie landowners and nobility, the SALAD quickly took control of the former county of Amarr. They also pushed forward towards Twoggle, since that area of the Lachmodan coast is majority Sani. The islands of Ž and Azarea also joined after local uprisings.

On 12.X.1671 the SALAD leaders announced that Sanama had been liberated from fascists and imperialists. They announced elections for local citizens' assemblies to take place on 15-16.X.1672. The SALAD leadership also committed to not fielding any candidates nor participate as a party in the election. It also launched a campaign to get people to vote, with efforts to educate the people. The SALAD was succeeded by the Sanaman Liberation Front.

Sanama disputed southern Highpass with the local bourgeoisie and a low intensive war broke out along a line of control. The claim was later abandoned and a treaty reached with Shireroth.

In 1672 the provisional government adopted the Natopian natopo as the currency of Sanama. The Shirerithian Erb had been used up until then, but since the Kalirion Fracture, that currency is in free fall. To stabilize prices and secure the important revenue from oil exports, the government unilaterally adopted the Natopo.

In XV.1678 General Adalwolf Hiedler took power in the 1678 Sanaman coup d'etat and established a military junta. The rule of the junta quickly descended into repression and violence, fueling mass protests. On 21.III.1679, an increasingly insane Hiedler proclaimed himself King of the Sanamans. About three weeks later, he was assassinated in the Lakhesis Incident, after which Councillor Amarlic Woehrle handed ultimate state power back to civilian authority.

On 12.X.1679 elections were held to the new legislature and the newly established presidency, marking the beginning of the Second Republic. During this period, the coalition between the United Nationalist Alliance and the Sanaman National Party dominated national politics, under the presidency of Keysa Nur Pinito Caprici, with Tanilo Lhayi as Chancellor in the beginning. The period saw an unprecedented expansion in the Sanaman military as well as the overall Sanaman economy, after the governing coalition liberalised key areas of the economy, while keeping a tight grip on those sectors deemed most important to national security.

After an economic downturn during 1686 which the provinces were unable to handled, the Second Republic came to an end on 1.I.1687, when Sanama transferred to a unitary state, with extensive devolution to three autonomous countries. The economic downturn lead to a decisive victory for the center-left coalition between the Sanaman Liberation Front and Coalition 1660, ushering in a period of cohabitation with a center-right president Nur Pinito Caprici. The first period of cohabitation was marked with conflict between the Council of State on one hand, and the President on the other, with the President making strategic use of her veto powers. However, the constitutional requirement to not veto measures included in the Chancellor's Programme was respected. After the government under SLF Chancellor Taliya Wilamu failed to adequately recover the economy, as well as indecisive national security measures, as well as a scandal in the UGB involving Coalition 1660 played out just before the 1691 election, the center-right Alliance for Prosperity came back into power, now with the roles from 1679 reversed, with Nur Pinito Caprici as Chancellor and Tanilo Lhayi as President. The Nationalist & Humanist Party, newly admitted to the AfP, made sure that they would enjoy a comfortable majority in the Lhusan.

Sanama has a tropical to arid climate. The equatorial vortex sends water saturated air northwards. When the hot air meets the cooler air over land, it releases large amounts of rain that become less prominent farther north. When the precipitation is released, the now hot air contributes to the drylands in the north and east. The vortex then pulls this hot dry air southwards. The south and west is dominated by wetlands and rain forest, the middle by broad-leaved tree forests and savannah, while the east shift from steppe to desert. The northern parts of Sanama are dominated by the Veldt, a steppe area covering much of Highpass. The lack of precipitation is mostly caused by the Kordilhera Mountains. The area is instead watered by rivers flowing from the north.

Sanama is governed as a semi-presidential federal republic, with a strong president serving for six years as head of state. The head of government, the Chancellor, is appointed by the president and must maintain the confidence of both the Llusan and president to remain in office. The legislature, the Federal Assembly, consists of the Senate with nine senators per province, and the Llusan with 639 members elected in constituencies based on the administrative divisions.

Since the restoration of democracy in 1679 and the establishment of the Second Republic, the country has been divided into nine provinces and three territories. The provinces form the federating bodies, while the territories are under the direct authority of the federal government. The provinces decide on their own forms of government, provided that they are republican and democratic. Most operate under a system with an elected legislature and an executive appointed by the legislature, but a few have a directly elected executive. Under the provinces are regional government units with names and powers varying from province to province. The regional government units are usually made up of rural and urban subdivisions, also varying in names and powers. 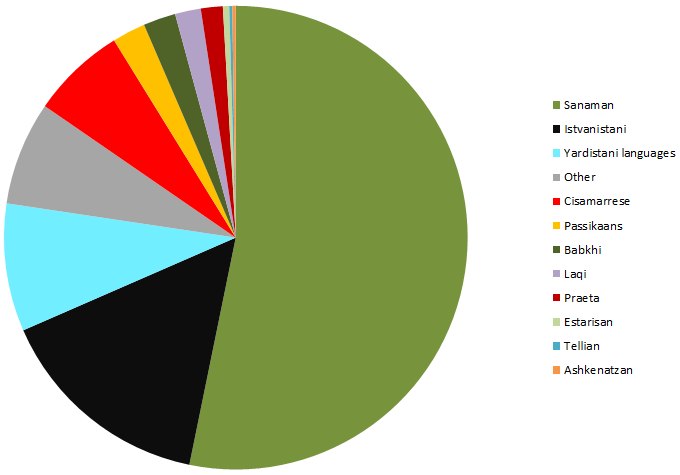 Sanama is a multicultural country with several indigenous languages. The plurality language, spoken by 60 percent of the population, is Sanaman. Istvanistani is spoken by 16 percent, while Cisamarrese is spoken by around eight percent. The remaining part of the population speak Babkhi, Laqi, Praeta and several other domestic and immigrant languages. The Estarisan language is spoken on the island of Estarisa (Azarea) to the southeast where it is the official language. It was during the Shirerithian occupation considered to be a dialect of Sani, but is now being reclassified as a language in its own right due to it not being mutually intelligible with Sanaman.

Under the First Republic, Sani, Ama, Istvanistani and Cisamarrese were designated as official languages on the federal level. On the cantonal level, each canton was free to choose its own official languages, as was every commune and district. Due to a lack of interest from the former colonial power, the actual number of speakers of the various languages was somewhat unclear until the census of 1674 was undertaken across the country.

Sanama is a religiously diverse country with no one religion dominating. Cedrism is popular among the Istvanistani- and Praeta-speaking people. It also has numerous Sanaman followers due to being promoted during imperial rule. A large number of Sanamans follow the traditional religion Somanes which is heavily influenced by Cedrism and also somewhat by Nazarenism. The third largest religion is the Nazarene faith, primarily among the Cisamarrese people, but it also has adherents among the other ethnicities. A significant minority also profess no religion or atheism.

There is no national Sanaman culture, although the federal government is promoting values based on humanism, democracy, pluralism, egalitarianism and tolerance. Cultural and ethnic identity is closely related to language, but there are people identifying as one ethnicity while speaking another language, mostly Istvani. This is a remnant from Istvani being considered a prestige language during imperial rule.

Transportation in Sanama is largely done by road, both private travel for citizens and tourists, as well as commercial traffic. Air Sanama provides domestic flights between the largest cities, as well as international destinations. Sanama also inherited a derelict and largely unuseable railway network from Shireroth. The network has been replaced by a modern high speed connection, the Cosimo Line, spanning the country from Acquecalde in the west to Soli in the east. Feeding this line are numerous standard railway lines, primarily connecting to Fatehpur Sikri and Niyi. The cities of Fatehpur Sikri, Niyi and Acquecalde also have tram networks, although the rolling stock and infrastructure in all three cities are old and in need of maintenance and repair.