The Raspur Pact Training Mission-Shireroth (RPTM-S) was established in 1679 at the initiative of Benacia Command. The aim of RPTM-S was to assist in the development of Imperial Forces training structures and institutions so that Shireroth could build an effective and sustainable capability that addressed the needs of the Imperial Republic, that would defend its remaining territories against secessionists and which would be able to resist any further efforts at capitulation by the regency in Shirekeep. RPTM-S was not a combat mission but was a distinct mission, under the political control of the Raspur Pact's Joint Military Council. Its operational emphasis was on training and mentoring. The activities of the mission were coordinated with the Shirerithian Ministry of State, whose minister was the de-facto commander of the Imperial Forces, and the Imperial Advisory Council.

In 1694 Benacia Command authorised the return of a significant quantity of surplus small arms, rejected by the UDF for use in the Second Elwynnese Civil War, to the arsenals of the Imperial Republic. These comprising primarily of:

The weapons would be transferred from the depots of the Black Legions in the Unified Governorates to designated arsenals in Brookshire and the Duchy of the Guttuli via a series of road convoys that would travel across the UGB, Tellia, Sanama, and Drak-Modan in order to reach their intended destinations.

The Imperial Forces have a distributed structure that relies predominantly on ground combat as a consequence of the Kalirion Fracture and the loss of advanced military hardware and the trained personnel to operate them. At its low point, the Palatini Corps was the only armed force under Imperial authority.

At the operational level, ground combat units are organized into Reinforced Cohorts (Pr. Toißuszoþ Gauht), a concept adapted from the Guttuli Corps's Streïkrupp. As the name suggests, an infantry cohort is reinforced with attached armored reconnaissance, artillery, and engineering maniples. This allows for the application of heavy weapons systems to be more easily available at the tactical level. The commanding officer of the cohort, typically a Mid-Grade Tribune, serves as the commanding officer for the Reinforced Cohort.

Three Reinforced Cohorts, along with the parent units for their attached combat support as well as additional defensive and logistical support units, are organized into a Battle Command. The Battle Command is expected to be capable of sustained independent operations.

As directed by the Ministry of State's Commission for Defence, regular Imperial Forces now operate within a single system of ranks, uniforms, and equipment, in order to sustain interoperability.

On paper, each regional army maintains its own general staff under the authority of its own Master of Soldiers, who creates field formations, called Associations, over whom he designates a Standard. In actuality, the regional armies have been reduced to a merely administrative role, with each general staff tasked with maintaining supply and training. Associations are created under the direction of, under the authority of an appointee of, and receive strategic direction from the Commissioner for Defence. Associations are composed of units freely shuffled between Associations as necessary to meet Imperial strategic goals with the shortest logistical lines. This arrangement is a systematized form of the previous ad-hoc Banners placed under the appointed authority of a Nypḥyk'u (RL. "Standard Bearer"), whose subordinate units were a free mixture of militia, professional, and irregular troops as resources allowed it.

These changes are reflected in the changes to the rank structure, which no longer distinguishes between 'Spear' and 'Specialist' units, which has condensed the general officer ranks considerably, which has placed significantly larger responsibility upon the Field Officer ranks, and which has seen an expansion of Company-Grade and senior-NCO ranks. Under this new scheme, which has been influenced by its roots in the Brookshire militia and re-educated remnants of the Guttuli Corps, NCOs (or Principals) can seek entry into the Officer Candidate program, receive a commission, and gain access to the higher ranks. The children of nobles have adjusted to this more meritocratic officer recruitment process by sending their children into military academies, so that they may qualify for career acceleration upon entry into the Imperial Forces. 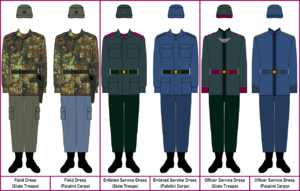 Uniforms for the Imperial Forces, circa 1702 AN.

In the decades after the Kalirion Fracture, the Imperium relied upon irregular forces, local militia, and rehabilitated defeated hostile forces to augment the Palatini Corps, the only components of Benacia Command that had remained loyal to the Golden Mango Throne. Beginning in the 1690s, regularization became a priority for the Imperial Commission for Defence. Introduced in 1702 AN, a new set of standardized uniform specifications were established, replacing all previous forms.

The Palatini Corps retained a distinct color and cut for its field and service uniforms, and was given permission to continue using its distinct Full Dress uniform, first authorized in 1663 AN, when on ceremonial duty in Shirekeep.

Issued to all members of the Imperial Forces, derived from the all-weather utility uniform used by the Ŝḥenĉeł'yh and adopted by the Brookshire Ducal Army. 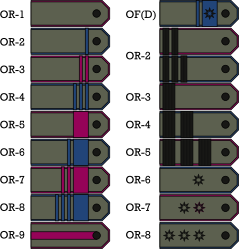 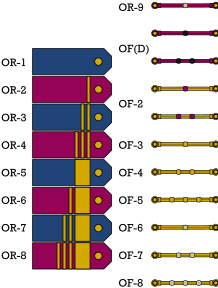 Main articles: Military Equipment of Shireroth and Inventory of the Imperial Forces (Shireroth)