The Revolution of 1617 (Revolution of 5552 ASC), which also became known as the Kildarian Independence War or in certain Shirerithian sources known as the Anandjan Revolution [1], was a revolution which ended more than 200 years of Shirerithian dominance in Kildare (which began with the conquest by Kaiser Gaelen I in 1451 AN) and brought an end to the monarchy, effectively replacing it with a single-party military dictatorship.

The main players in the were the National Movement, which eventually would form the Apollonian Republic, the Loyalist Ryvenna Monarchy (with as main goal restoring the monarchy and staying loyal to the Mango Throne), the County of Melangia and the kingdom of Hawshire-Dura.

The Dutchy of Kildare had for the longest part of its existence been a strong supporter of the Imperial Republic. Many patriotic songs and speeches had been written throughout its history in which the Kildari confirmed their loyalty to the central government. However, from 5141 ASC and onwards, more and more resistance grew against the dominant position of Shirekeep in imperial affairs.

With more and more power entrusted to the Imperial States, the Kildarian administration began to feel - and act - as a more or less independent country. This sometimes ended up in a conflict between the Eastern and Western government [2]: for example during the reign of Dutchess Sophia who entrusted important government positions to Jingdaoese and eventually attempted to join the military League of Nations for the Advancement of Purity [3]. This was met with heavy resistance from the West and the Dutchess was forced to back down. This led to an angry remark by one of the court officials:

"Shirekeep expects us to rule ourselves, as I haven't seen many Shirerithian dignitaries in the fifty years that I worked here. The times that a Kaiser visited us in the last 4,700 years, can probably be counted on one hand [4].

They want us to take responsibility within the realm by protecting stability. But when our Dutches ask support from foreigners, they are frowned upon by the West [5]. We get treated as parias because we sought help in other places!

They asked us to fend for ourselves: defend the borders of this vast land. But where was their support when Kitanus Fields fell under the barbaric invasion of the Garliccians? However, when we finally find an ally which is capable of supporting us against barbarians, we are stopped by the Mango Throne and its army of advocates.

I can only conclude that in the end they ask us to do everything ourselves, but act when we walk out of line. Where this line lies is open for interpretation, but as Shirekeep dictates the Imperial Laws, they are always right and we're always wrong." 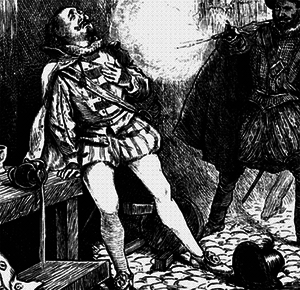 The shot fired in the Augesbury Murder was not fatal. Afterwards an attack on his hotel followed by soldiers of the MoMA: several people were killed.

The above quote is typical for clerks and other officials of the Eastern Court, as through time the distrust towards the westerners grew. On state banquets on which Elw traders and senators were invited one of the Kildarian Senators remarked jokingly: "It's funny to see that the distrust we have towards you [the Elws] has grown into a distrust towards all westerners."

The joke, however, held more truth than they thought. But for the time being, none undertook any actions against the Shirerithian rule and life went on.

It was the murder of Dutch Titus Myksos on 24.09.1617 - which would be known as the Augesbury Murder [6] - during a state visit in Norfolk (Aryasht) that resulted in the declaration of independence. During an argument, the Dutch had - while being drunk - angrily announced the independence of Kildare. The Ministry of Military Affairs, with Minister Kraut, reacted upon this by ordering the assassination of the Dutch. When this failed, he and his bodyguards, were slaughtered in their sleep like cattle. This, meant as not only a warning towards the Kildari, but also towards rebellious Elws, angered the Kildari and backfired when the Dutchy fell into disarray and the National Movement received large support of the military.

The Revolution was both supported and opposed by many groups, including students and intellectuals who returned from the West, as well as participants of the revolutionary organizations (till then persecuted by Ducal authorities), soldiers of the armed forces (mainly the Legions), local farmers, nobles and others.

Thousands of overseas Kildari, including students and intellectuals, returned from western Shireroth to Apollonia when they heard the news of the Revolution. Their support was in most cases in favour of independence, as they had seen with their own eyes how different western Shireroth was from their own homeland. The most patriotic speeches came from those witnesses, with which they successfully rallied people behind the National Movement's organisation. 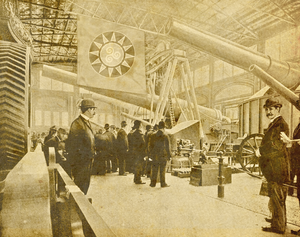 The majority of industrialists saw advantages in supporting an independent Kildare.

The latter part of the Fifth Millennium had brought Kildare a huge increase in welfare thanks to rapid industrialisation in certain areas of the country. During the Myksos Dynasty, and because of ongoing invasions on the Kildarian borders, the economic growth stagnated at the end of the millennium. The 54th century (the Flavian and Titus' Era) brought a revitalisation of the industry and Vervollkomnung and Gong Li slowly became industrial powerbases for military goods.

When the Revolution began, Marcus Myksos of Vervollkomnung Incorporated decided to support his nephew, Trajan Myksos and his National Movement. The large sums of money and the new weaponry were important factors in gaining superiority over the Loyalists.

Soldiers of the Legions

The Legions troops were by far the best trained and equipped in Kildare at the moment of the Revolution. Throughout their existence they had replaced the Kildarian Defence Forces as main land force. Their recruits also consisted mainly of Audentes, as the Dukes had considered this safer (distrust towards soldiers from other counties was common, as the government feared that in case of internal conflicts, soldiers would chose the side of their own county). When the Revolution started, the Seanad begged the Legions to interfere, but they decided to ignore this call. Instead, the majority of the armies joined the National Movement's cause.

The militias and Kildarian Defence Forces stood no chance against the well-equipped Legions.

Among the biggest denouncers of the Revolution were the nobles who saw independence as a danger for their power base. Remarkably is, however, that while counteracting the National Movement, they minimised their support to the Loyalist cause. The cause of this laid with 400 year old-attempts by the Myksos Dynasty to break the nobles' power. Dutch Taodosius and his successors had successfully minimised the power of the local nobility in favour of court bureaucrats.

Dutch Titus - whose murder would start the Revolution - had given the nobles back a bit of their tasks and had given in to restore some powers to the Seanad (in which the more important nobles were seated). With the outbreak of the Revolution, the nobility hoped to proceed in the same manner and enlarge their own power.

Frightened that the Loyalist government would act the same as the Myksos Dynasty, they attempted to stay neutral. This proved a disastrous choice, both for them and the royalists of the Loyalist faction. With the ensuing chaos, they quickly raised militias and proclaimed small, independent nations. Those proved no match for the well-trained armies of both the Loyalist and Nationalist side. In the end, the Loyalist received little support of the nobility, which weakened their position and sealed the outcome of the war.

Establishment of the Apollonian Republic 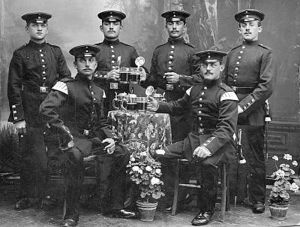 The six Mils (commander of a Legion) of the Garllic Border Legions who immediately supported Trajan Myksos in the creation of the National Movement.

After the collapse of the central government, several factions stood up in an attempt to take power. The most successful was the National Movement which, in the spirit of the deceased Dutch Titus, confirmed the wish to be free from Shirerithian rule from the West.


Today marks the end of an era. For almost 200 years Kildare had been under the wings of the Imperial Republic of Shireroth. It was in 1451 AN that Kaiser Gaelen the First landed upon our shores and defeated the armies of the Union of Apollo States. The divided Apollonian forces stood no chance against the great power that Shireroth was in those days.

We were divided and could not fight our inner enemies, let alone fight those from the outside. As we all know, that was the beginning of feudalism in the East. It were the days of noble Dutches who ruled the realm and who slowly helped the states that once fought each other discover their new identity. 5,000 years later our people still have distinctive properties, but now they even share a stronger bound between them.

This bound is not shared with those we call brethren in the West. With distrust we look to Shirekeep and the other States, who have threatened our rights more than once. Let’s free ourselves from the chains that Gaelen put us in and let us walk away from this prison as not only free, but also stronger, men and women!

And because we want the people to be truly free from those chains, it is my wish – and that of my fellow officers and soldiers – that we will destroy the old institution which oppressed us! Down with the nobility and their privileges! Down with the monarchy of Dutches that ruled our realm for far too long!

I hereby proclaim a republic for the people and from the people! Not a simple republic guided by corrupt officials, chosen by the disillusioned masses, but an Apollonian Republic! A nation ruled by capable military rulers, who will do everything to keep their people safe!

Let us fight together! Join me in the struggle for survival! Join me in my quest to establish the Apollonian Republic of Shireroth’s East, the ARSE!”

Reactions of the Loyalist Forces

Progress of the war efforts (animated).

The Revolution of 1617 ended in a crushing defeat for the Ryvenna Monarchy. The leaders were in most cases executed for high treason or send to re-education camps that were rapidly created throughout the country. The defeat of the monarchists - which were in most cases in favour of keeping ties with the Mango Throne - smashed the hope of several Shirerithian officials that Kildare would remain a part of the Imperial Republic.

With the National Movement of Trajan Myksos firmly in the saddle, the official capital was moved to Blackrock Nua. With the thousands of deaths, enormous collateral damage and the local economy of many villages in ruin, new reforms were deemed necessary to improve the lives of the Kildari.

Upon this the National Movement redivided the fractured nation into districts and provinces, ignoring former cultural and political bounds, abolished the privileges of royalty and nobles, encouraged participation in nation-wide organisations (replacing local patriotic societies) to promote Apollonian nationalism and plunged enormous sums of money in the development of Kildfare and the (re-)construction of roads.

Hawshire-Dura stayed a part of Shireroth, as an ancient treaty made it impossible to formally secede from Shireroth. The lack of interest of the Hawshirians made independence also very unlikely [8]. The National Movement, not interested in an ongoing conflict for two islands which never truly were considered Kildarian anyway, agreed with letting it stay part of Shireroth.

Melangia, however, was another case: the Melangians themselves had mixed feelings about what was going on in Kildare proper and had chosen the middle road: declaring that they remained part of both nations. This was met with hostility from both sides, while the A.R.S.E. is the only nation that claims it formally (Shireroth didn't like the prospect of a prolonged conflict).