From MicrasWiki
(Redirected from Ŝḥenĉeł'yh)
Jump to navigationJump to search

The Ŝḥenĉeł'yh, commonly misspelled Shenchely, were a division-sized military force in the service of Salome as Duchess of Brookshire. It initially formed as a mercenary group contracted to provide services in Brookshire. The Ŝḥenĉeł'yhe were multiethnic and multilingual, but were dominated by Laqs, who formed its backbone of hardened fighters and leadership. As such, the group conducted itself primarily in a special variety of the Red Laqi language, Dolorbze.

In 1711 AN, the Ŝḥenĉeł'yh was absorbed into the Imperial Forces proper and restructured into the Evagati Corps.

Ŝḥenĉeł'yh operations were directed by the Has (RL. "Council"). Each of the seven Hasešyšeh (RL. "Council Members") had served as Standard Bearers on various Imperial Expeditions, including the Kaiseress herself.

In IV.1683 AN, as part of an effort to systematize and expand the Ŝḥenĉeł'y ranks, the Duchess-in-Kehl issued directives detailing the authorized number and rank of owners and fighters for a correctly-organized and fully-staffed fighting company:

1 Tḥemat as commander;
5 Bysymeh, numbered according to seniority, with the first as second-in-command, and the remainder it command of each fighting Kort;
1 Ẑyŝypq, to enforce discipline and provide advice to the commander;
19 Feġzek'oh, to command each Kwp;
48 'Epe'as, to assist their Feġzeko' in command of the Kwp; and
96 Zoak'oh, to do what they must.

The fighting company, or Xwrai (RL. "circle"), is to have one Kort in the middle as its headquarters, with Kwpeh to supervise assets, cooking, and exceptional arms, as well as to oversee attached medical, engineer, logistics, and other units. It shall also have four fighting Korteh.

A fighting troop, or Kort, shall have one Kwp in the middle as its headquarters, with 'Eh armed and trained for anti-tank, mortar, and sniper duties. It shall also have three fighting Kwpeh.

In its original iteration, Ŝḥenĉeł'yh fighting companies operated as independent maneuvering units, with higher formations developed ad hoc as necessary for a particular campaign. Since the 1680s, as part of its major restructuring, these fighting companies were permanently made organic components of battalion-sized units (RL. Tam "wings"). These consist of three fighting companies, a wing headquarters, and wing support.

In the Wing Headquarters, staff officers handle communications, intelligence, planning, logistics, manpower, and training. In the Wing Support, staff officers oversee medical and engineering detachments, as well as others as necessary for a particular campaign.

The Ĉ'yfenĉeł'yh (RL. "debtless men") are a special forces formation within the Ŝḥenĉeł'yh, notable for being composed solely of fighters who furnished their own equipment and training, chose not to buy in as a shareholder, and otherwise have no debts to resolve through their service.

As such, they effectively function as subcontractors to the greater organization, and each unit of Ĉ'yfenĉeł'yh is organized independently to that of the main organization.

Rank and position within the Ŝḥenĉeł'yh were dictated by financial status as well as fighting and command skill. Those who had been wealthy enough to buy into the organization to become a shareholder were called Bysymeh (RL. "Owners"). Those who had signed on to provide their services to the organization to cover debts and had to be furnished with equipment and training are called Zoak'oh (RL. "Fighters").

Ŝḥenĉeł'y rank insignia were marked on sapphire blue shoulder tabs, which were only earned by successfully completing all rounds of training. For soldiers, advancement was marked with buttons; for officers, it was marked by ribbons of varying width and number. Nypḥyk'u was an appointment conferred on tamtḥemats when serving as a field commander, especially when commanding a mixed force. Bysym had two levels, with Bysym Naḥyš'e ("Younger Officer") serving as an aid or command over a lower-ranking troop, and Bysym for senior company-grade roles, such as commanding a senior troop or as company 2i/c. 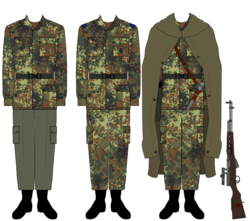 All Ŝḥenĉeł'y were issued both pistol and rifle as part of standard gear. The M1525 semi-automatic pistol, with some units instead using the M1486 revolver, served as a short-range defensive firearm. Being a Laq military formation, all Ŝḥenĉeł'y were also equipped with their personal dagger.

The M1610 semi-automatic rifle functioned as the Ŝḥenĉeł'y primary offensive weapon, a significant upgrade from civilian-type or stolen M1568 and M1591 bolt-action rifles that many Laqi had been accustomed to for the past century. The M1610L, a variant developed in coordination with Laqi marksmen to meet their demands, was the most common type in use.

Each fighting team was issued one Wren LMG, while heavy weapons teams were issued recoilless rifles, mortars, and sniper-variant M1591s to fulfill their specialized roles. Other firearms, such as submachine guns, anti-materiel rifles, MPADS, etc, were deployed from company stores according to mission.

For rudimentary CBRN protection, beginning in 1694 AN, Ŝḥenĉeł'y began to be issued the RL-2 durable half-mask respirator, with the appropriate filter cartridge loaded into the front of the respirator.

Ŝḥenĉeł'y units employed Laqi-style guerilla tactics, which preferentially avoided conventional open battlefield engagements in favor of concealed movement, infiltration and envelopment, targeted focus, and defeat in detail in order to wear down the enemy and disrupt its ability to operate and hold territory. The actual acquisition of territory was seen as relatively unimportant in comparison to undermining the enemy's sense of safety and control.

This involved a reconnaissance and intelligence-gathering phase, to adequately assess the value of a target towards the overall operational mission (or to identify a means of circumventing it), evaluating the target's strongpoints and weaknesses, establishing forward deployment and retreat positions in order to monitor and assault from and to withdraw safely, and rehearsing the particular maneuvers of the attack.

An attack needed to have a quick/nimble advance, maneuvering in small, discrete units as much as possible and taking circuitous, indirect paths, before arriving at their forward deployment position. It also needed a quick/nimble assault, focusing overwhelming firepower on an identified pressure point within a narrow timeframe. Finally, it needed a quick/nimble withdrawal, with an attack's discrete units dispersing and regrouping towards their retreat positions, allowing the enemy's post-attack reaction to be monitored and managed.