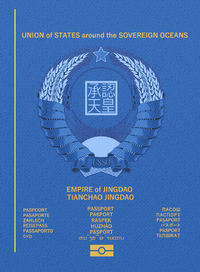 As a member of the USSO, citizens of the Jingdaoese nation are eligible to receive USSO passports which allow them to travel freely across all of the alliance's member nations.

The diplomatic affairs and relations of the Jingdaoese Empire are conducted by the Secretariat of Talking, which is part of the Ministry of Stability. The Secretary handles the initial contacts with nations and entities, after which the Imperial Household formalises and passes the agreement. Its offices are located in the Changgong Headquarters, at Sheng Garden No. 20.

As a great power, Jingdao's foreign policy has long been dominated by an aggressive staunch, as it saw it as its divine duty to unite the world under its own purified banner and protect it against the corruption of what it perceived to be its enemy: Shireroth. This brought it frequently in conflict with other nations, like Passio-Corum, which - ironically - became on of its staunch allies in more modern times. This policy was altered with the reign of the Jinken Emperor in 1608 AN, and a more peaceful and less threatening model of interaction was chosen.

Because of its difficult, and even hostile, relations with the Imperial Republic of Shireroth and Natopia, the Jing foreign policy shifted towards a policy of containment and neutrality or friendship with smaller nations and neighbours. Throughout its history it saw military conflicts - like the War of Lost Brothers - with those nations, with mixed results.

Jingdao is a member state of the Union of States around the Sovereign Oceans. It was previously a member of the Micras Treaty Organization from 1624 after it had taken over the Apollonian Republic, until 1670. It's, together with Passio-Corum, a heavy investor in the USSO Common Market.

The current objectives of the foreign office of Jingdao concentrates on pacifying and strengthening its presence at its borders. National defence and strategical dominance is the main goal of the Jingdaoese:

Tired of years of warfare and ongoing conflict, the Guanchang Faction pushed for a divide and protect-policy in which it more or less accepted Shirerithian hegemony in Benacia, while focusing on keeping its own hegemony on Apollonia. 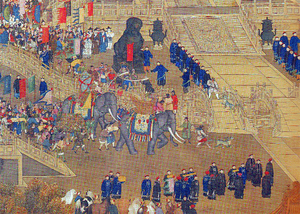 Diplomats visiting the Emperor had to kneel and honour the Emperor by paying tribute. While this action was merely symbolic and the value of the gifts was not that important, most nations paid significant sums to entertain the Heavenly Light with grand gifts. The Babkhans, for example, brought gold and elephants.

Nations which interact with Jingdao, receive a rank. Depending on the relationship with the Heavenly Court, a nation can receive gifts and benefits from the Empire. Some nations are perceived impure (Hun), making relations beyond war declarations and temporary truces impossible, while others can gain the status of Xing (relative pure) and will be treated as friends. The middle ground is called chu, which is neutral. Neutral nations that are considered to be moving in an impure direction are called chu-hun, while neutral nations that are considered to be moving in a pure direction are called chu-ji. The classifications are officially based on the perceived merits of the nation, but in practice they resemble the rivalries and interests of the empire. In the past, a more belligerent and less powerful Jingdao saw most other nations as hun, but the empire as of 1685 has become the largest empire on Micras and is very much interested in maintaining the status quo, most nations are classified as chu. An exception to this rule are the Vanic nations.

When a diplomat seeks to gain access to the Imperial Court, it is advised to bring tribute to the Emperor. A representative of Jingdaoese descend is expected to kowtow in front of the Heavenly Light before being allowed to discuss the terms of a treaty or agreement, while non-Jing diplomats are expected to bow before being spoken to. Refusal to comply automatically ends any talks between both sides, as it's seen as a terrible offence.

The tribute, often in the shape of animals, local products or even bound servants, is seen as a symbolic gesture and (in the eyes of the Jingdaoese) a sign of recognition of the Heavenly Light as suzerain of Micras.

Following list was last revised on the 13th day of the 11th month of the year 1685, during the reign of the Chidao Emperor. A first review of the was compiled by head steward Shen Chidao, after consultation with the Sifang Suweiai. It is reported that the vote on the list was not unanimous, with several councillors advocating a chu-status for the Bovic nations such as Natopia. After publication of the list, it was brought to the attention of the Chidao Emperor, who personally struck all nations except those affected by the Vanic taint from the list of hun-nations.

The Imperial Envoys act as ambassador to foreign countries.