Operation Paramount is the New Alexandrian codename of a military invasion and seizure of the northern Euran Green that bordered Nouvelle Alexandrie, the Thraci Confederation, and Constancia that began in 1698 AN by the Federal Forces of Nouvelle Alexandrie and the Imperial Constancian Armed Forces. The joint operation is generally considered as Nouvelle Alexandrie's official entry into the Third Euran War on the side of Constancia and Suren after years of providing material and financial support to both nations.

Following the western expansion of the Thraci Confederation into Razjania in late 1693 AN, New Alexandrian and Constancian diplomats meeting in nearby Fontainebleau signed a secret agreement. This agreement was signed in 1697 AN after years of negotiations and planning to cement their joint political and military collusion to seize the remaining northern Euran Green areas to prevent further expansion of the Thraci Confederation or any foreign designs on the area that could compromise regional stability and national security.

Before the formation of the Federation in 1685 AN, independent Alduria had no clear policy toward the developing strength and boldness from the groups forming Azad Eura and the remaining militias and populations that were displaced from West Baatharz during the West Baatharzi War. Special paramilitary teams from the Aldurian Department of Defense often engaged in covert operations and paramilitary operations to gauge the strength of these groups operating in the vast Euran Green between Constancia and Alduria. Around the same time, top foreign policy officials offered several proposals to begin to settle the lands and expand Alduria into them in order to accomodate the waves of immigrants coming to Alduria to settle under its Law of Graces.

Things began to change when in the early 1680 ANs, when Aldurian settlers and entrepreneurs formed settlement and colonization companies to expand into other areas. This was very much like it had been done in the past, especially during the foundation of Alduria, to build and settle into new lands that were previously not part of Alduria but were later annexed. There is great motivation for these settlement and colonization companies to be created, particularly an economic dimension, driven by the significantly lower costs of housing, cheap availability of labor, and the high demand for construction that construction companies were ready to meet. To further exacerbate matters, due to the special attention many new communities recieve from the government in order for them to succeed, government spending per citizen in new settlements is double that spent per Aldurian citizen in major cities like Punta Santiago, for instance. Most of the spending goes to the security of the citizens and towards the construction of critical infrastructure necessary for the success of the new communities. To add to this, Aldurian law generally only considers land within their legal registry to have owners, therefore, new and annexed territories usually had significant amounts of land that first settlement companies would claim as their own, but then later on was capped by Aldurian regulations, which led to the government holding much of the "free" (referring to unowned) lands. The majority of these lands, generally called "public lands", were usually held in trust for the people of Alduria by the national government and managed by the Aldurian Department of the Interior.

After the formation of the Federation in 1685 AN, settlement policy was strongly encouraged by the government of President Alejandro Campos. He pursued an aggressively expansionist agenda that saw Nouvelle Alexandrie expand rapidly beyond its original constituent nations of Alduria and the Wechua Nation. The expansion plans implied annexation of major parts ungoverned territories, especially islands and land between the valuable sea and air routes between the Federation's Euran and Keltian territories. After these plans were realized and the Regions of New Luthoria, Islas de la Libertad (where expansionist designs by rival Çakaristan were foiled), North Lyrica and South Lyrica, new plans were drawn up for a massive territorial expansion to close the vast gap of Green territory between the Region of Alduria and Nouvelle Alexandrie's ally and important trade partner, Constancia.

Around the mid-1690 AN's, well after the expansionism of Campos administration, the government of Nouvelle Alexandrie largely ignored the newly forming settlement companies that were crossing the Nouradin river from the Aldurian states of Alcalá, Carrillo, and West Baatharz. Many of these began to establish settlements in lands that were still ungoverned, without the sanction and protection of the government. This, in turn, began to rile up the displaced populations from the invasion of West Baatharz, not to mention the groups that formed part of Azad Eura and were embroiled in the continent-wide Third Euran War. They were established as outposts secured by private security firms and later expanded and populated with civilian inhabitants.

The official explanation of the Imperial Constancian Government regarding its involvement in this scheme was the need for more living space, as its growing population also had growing needs for housing and employment, and while sufficient development was taking place within the elite enclaves of Aqaba and Petropolis, the Constancian elites didn't exactly want to be living side by side with the workers, and the growing middle class of professionals, middle managers and expatriates also wanted enclaves of their own. Of late, Constancian development was also bottlenecking due to the lack of adequate professionals, and while the Nouvelle Alexandrie and other Raspur Pact nations were ready, able, and willing to provide their own (in order to help keep their own local economies afloat), the longer-term plans required the sustainable development of a Constancian professional middle class. Get rich, recommend, but be silent and do not agitate about political matters. This was the hybrid political economy and governance scheme proposed for the next great leap forward.

The liquidation of the Central Euran Republic and Mbasana would secure lines of communication with Alduria, reviving the prospects of a Pan-Euran Highway without expensive and logistically torturous detours that relied on technically complex fixes such as a floating tunnel under the Gulf of Aqabah. Such an occupation would also permit for the eradication of cross-border smuggling networks and the expulsion of garrisons placed in the wilderness by certain third party nations in the pursuit of an ill-advised policy. The most important benefit would be a swelling of the vast kul population of unfree labourers which would free up Constancian and Raspurid citizens to pursue the sorts of career specialisation that would benefit a developing economy and the Honourable Company which operated at its heart.

The occupation of central Eura would deprive the Free State of Constancia of its last viable area of operation in the Green at a time when the coalition of leftists and liberals were still reeling from the Thraci occupation of Razjania, which had destroyed their previous network of supply depots and training camps. Without these sanctuaries the democratic opposition would be left with the fateful choice of either exile or a return to Constancia that would be fraught with danger and the inevitability of being hunted down and liquidated by the Crypteia. Either way, the era of tolerated resistance would be at an end and all would be obliged to make their peace in submission to the corporate, humanistic, and technocratic state that the Autokrator had wrought out of the nation.

A new line of actual control was discussed and approved by the Alexandrian and Constancian delegates. The mission of preparing the campaign was accordingly passed onto the Operations Directorate of Trans-Euran Command. The dividing line between the operational area of responsibility for Susa Banner Command (Nouvelle Alexandrie) and Nivardom Banner Command (Constancia) was determined by the foes they were slated to eliminate. For Nouvelle Alexandrie, the priority was to suppress various Baatharzi and Iteran separatist groups and smuggler gangs operating in the ungoverned border regions; for this reason the priority of Susa Banner Command would be to seize nine landing zones to serve as forward operating bases from which to conduct manoeuvre operations into the interior to disperse and suppress the myriad hostile warbands. Nivardom Banner Command meanwhile was tasked with suppressing a trio of proto-states - the Free State of Constancia, the Central Euran States, and Mbasana; while the rebellious Constancian liberals operating in the green were a diffuse network which would need to be hunted down over time, where the other two were concerned the priority would be to dispatch motorised columns to seize and burn the capitals of the two realms and proclaim a conquest, whilst the subjugated populace would led away into a life of servitude. 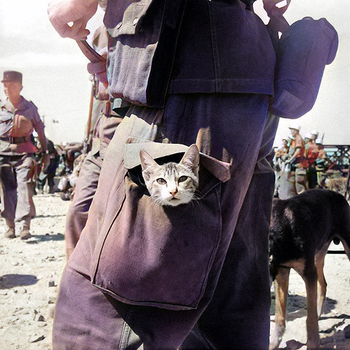 A some point after deployment to Landing Site "Villalba", this parachutist of the 313th Parachute Regiment evidently managed to recruit a feline auxiliary. 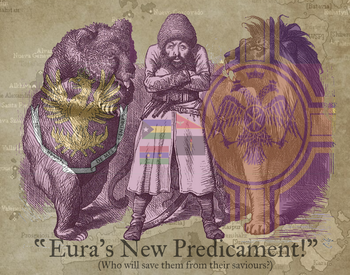 Cartoon published in the Shirekeep Gazette.