Petropolis is the long-planned inland administrative capital city of the Imperial State of Constancia. With the foundation ceremony being carried out in 1694 AN, it was named in honour of the then Basileus Petros III.

It is located in, but is not part of the Principality of Molivadia in central Eura, very near the border with Aqabah.

Long contemplated, the city of Petropolis was notified to the Micras Cartography Society on 9.VII.1694 AN as being established at a location on the border of Aqabah and Molivadia provinces. The area selected for the city was effectively a virgin site, without prior habitation, chosen for its proximity to the previously planned route of the Pan-Euran Highway. Whilst diplomatic issues with the Thraci Confederation had cast doubt upon the original course of the highway, the decision to relocate the seat of government to the planned city continued regardless as the Autokrator of Constancia sought to demonstrate his power over the Imperial State.

Petropolis was originally planned to be in Kendall Isle or Jaris, in the territory known as Oranje. Circumstances resulted however in Operation Franciscanian Exit and the withdrawal from that territory, although the files and plans remain in careful storage in the offices of the Thema Oranjēsiōn. With the rise of Primo de Aguilar as eventual Autokrator of Constancia, these plans were superintended by a specialized desk in the Imperial Chancellery.

The plan for Petropolis was publicly announced in 1694.

In practice the city is divided into plots obtained at the city's foundation by four distinct groups, these being:

Although all are supposed to be working to the diktat of the Primokratía in practice a lively competition developed between the four constituencies for planning permits, property rights, building materials and corvée work crews, which inadvertently resulted in a job rush in these four elite spheres of influence, as well as employment in the offices and projects close to these centers of power and influence.

To prepare the site for human habitation, and the construction work ahead, the populations of four rural communes, two from Aqabah Province and two from Molivadia Province, were uprooted from their respective coastal plains and marched under escort by the Home Guard into the interior. The corvée round-up collected 27,640 labourers in this manner, of whom, in spite of the vagaries of the road, 22,153 arrived on the plateau of Petropolis by 21.IX.1694 AN. The prioritisation of concurrent operational deployments (Operation Green Lion & Operation Northern Shield) limited the availability of trucks for the movement of the newly conscripted labour force from collection areas to their designated work site. Accordingly journeys to and from the railheads were conducted on foot. Able-bodied petty criminals throughout the Imperial State were likewise granted clemency on condition that they serve as part of the labour force for the remainder of their sentence. Initially Home Guard units also took a turn from their training deployments to take part, either as guard duty or as laborers, as part of their mandating physical training requirements.

Unless otherwise indicated, the womenfolk who accompanied the corvée labourers onto the plateau were set to work making the kilns in which were to be baked the loaves of bread produced from government furnished wheat. Such children as arrived on the preliminary construction sites were sorted into cohorts by age and set to fetching and carrying, foraging in the countryside, and where appropriate providing such services as the garrison troops might require.

Arrangements involving the Home Guard were improved and superseded on 11.IX.1694 AN by the deployment of the 1st Demi-Brigade of the 1662nd Modan Brigade. The organization and conscription of labor battalions from the lawful poor, petty criminals serving their sentence with a chance for conditional pardon, as well as the unskilled unemployed (who joined up for the skillset, favorable references, a chance to learn a trade, as well as an opportunity for social advancement via the Imperial Government, the ESB Group, or such other similar institutions of the Constancian elite.

During 1694, officers of the Imperial General Staff and the Imperial Guard began to arrive at Petropolis to stake out claims to plots of land on the limestone plateau, whether for the construction of their own new residencies or else for the purpose of speculation. They were joined by the The Most Serene Regiment of the Basilikē Touldon commanded by Syntagmatarchis Alexios Melas.

There being a standing directive from the Office of the Autokrator accordingly, the priority projects for 1695 were the following: 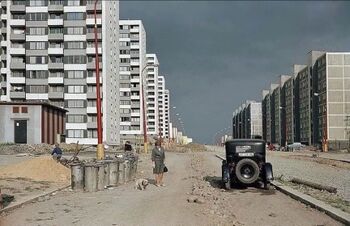 Housing projects in the ESB held sector of Petropolis, 1705 AN.

In 1700 AN the palace offered the sum of fifty imperial staters to every resident of the commune if they promised to obtain and keep a cat in their residence, as the city was in a dire need of mousers to combat the rising tide of vermin. The offer was later restricted to families of quality, after it became apparent that some of the labourers were seeking to use the promised bounty to purchase a ticket on the autobus service to Aqaba.

By the start of 1701 AN the 10th Imperial Synkletos convened as scheduled in the Palace of Imperial Unity. Only the plenary chamber was complete, but the broadcasts by ESB Media made it appear as if the imposing edifice was complete and ready for business.

The political situation of the country during the waning years of the Primokratía necessitated that much of the mudbrick and cement output of the city were diverted to the creation of a defensive curtain wall, with interior embankment for dugout shelters and eight angle-bastions enclosed by an exterior circuit of anti-tank ditches.

A forge was established on the site of the planned central maidan square to rework requisitioned items of scrap metal into caltrops to be scattered by the home guard on the roads approaching the city in the event of an emergency.

In spite of efforts to direct the labours of the communes towards the preparation of external defences, within the city the rival consortia continued to enclose with a mixture of mudbrick walls, concrete blast barriers, and barbed wire, the plots of land which they had purchased or else otherwise annexed. It was by the strenuous insistence of the civic authorities that the main thoroughfares of the city remained unimpeded by this competitive process.

Protests over the quality of bread and millet-beer given out as rations to the labourers marked the rapid approach of the tenth anniversary of the settlement of the peasants recruited to the corvée on the plateau. Many of the artisans employed in the construction of the central palace complexes meanwhile complained of their wages remaining stagnant on account of the influx of kul slaves taken from Mbasana following the conclusion of Operation Paramount.

In 1706 AN, the three regiments of the Honour Guard of the Autokráteira entered the precincts of the city following a march from Aqaba. Upon their arrival the kul population of the city was mobilised to commence the construction of new cantonments for the incoming Imperial Guard, to be 3km west of the Palace of Imperial Unity construction site.