Coat of arms of the city of Lucerne

The city of Lucerne is the capital of New Batavia and of the goverorate of Lucerne. It was founded in 2007 AD as the capital of the Federal Kingdom of New Batavia, which was one of the Virtual United Provinces. Mid-2012 the city was settled by Mercury and renamed to Lusa'aii. In 2013 the Government-in-Exile of the Islamic Internet Republic was offered sanctuary in the city. After the restoration of the IIR the city became the de-facto capital. On November 30, 2020 the nation was renamed to New Batavia and Lucerne became its official capital.

The city has a population of about 4 million people. An overwhelming majority of its citizens speak Dutch.

Lucerne gave its name to the royal house of Kurum Ash-Sharqia: the House of Al-Lusirni.

Saladin was the fifth President of New Batavia and was offered the throne of Kurum Ash-Sharqia to become its first Sultan.

He became president of the Netherlands in 2010. His party reformed the republic into the Islamic Internet Republic. Due to a deadlock that resulted from the elections of June 2011, Saladin announced to go into exile. He was later followed by the government, effectively establishing a government-in-exile.

He rarely participated in political debates or controversies. This is possibly the reason why he was offered the throne of Kurum Ash-Sharqia, where he became the constitutional monarch. After accepting the throne of Kurum Ash-Sharqia, he changed his name to Salah Ad-Din Al-Lusirni and moved to the city of Vrijplaats. On 2021-10-13 he married Batavian princess Elisabeth Asara des Vinandy.

The United Provinces, a predecessor of New Batavia, were a founding member of NEVO (Nederlandse Verdragsorganisatie or Dutch Treaty Organization). Other member nations were Flanders and Batavia. The organization existed from 2007 to 2010 and aimed to bring Dutch speaking micronations closer together. NEVO's directive on human rights is a lasting achievement, since it became part of constitution of the second republic and remained so in the third and fourth republic constitutions.

The very first champion in the ice hockey IJNB Pro League for men are the Lucerne Robben. They were first in the regular season and also won the play-offs by a seven points margin. As New Batavian ice hockey champion, the team qualifies for the MCHL qualifiers.

The team is based in the icy city of Lucerne. The city even has two teams playing in the Pro League: champion Lucerne Robben as well as their main rival and 2021 runner-up Lucerne Spoken.

The June 2011 elections in the Islamic Internet Republic resulted in a stalemate, due to the deep rooted antagonism between Nihill Romez and Frans. Government formation was extremely difficult. Then head-of-state Sadr Saladin announced to go into exile on July 4th, 2011. He was followed by the resigning Grand Vizier, Xander, on July 6th, effectively establishing a Government-in-Exile, which kept the memory and the legacy of the nation alive, also via MicrasWiki.

In the fall of 2020, the Government-in-Exile saw a rapid succession of Grand Viziers due to the Restoration Crisis within the IRP. The party was split into two wings on the question of whether and how to restore the Third Republic and resettle the lands on Micras.

The New Batavian National Football Federation (Nieuw-Bataafse Nationale Voetbalfederatie, or NNVF) is one of two main football associations in New Batavia, the other being the VBNB.

The NNVF is the oldest football association in New Batavia, but did not receive recognition from the Government to represent New Batavia in international sport competitions. This means the VBNB is a member of CTFA and the FMF, the NNVF is not. Due to this, the majority of New Batavian football teams have chosen to join the VBNB.

The NNVF organizes the "Honor Division" for men and women and the "Cup of New Batavia".

The President of New Batavia is the ceremonial head-of-state of the Islamic Republic. He is elected via general election for a six months term.

The Virtual United Provinces were established in 2007 and featured a presidential system of government. The Stadtholder (Stadhouder) was the chief executive. In 2008 the nation became a parliamentary republic and the office of President or Chairman (Voorzitter van de Republiek) was created. Since then, the office didn't change much, except for the actual title. It was changed to Sadr in 2010 and again to President in 2020.

President Saladin used his reserve powers once since the Restoration, when he refused to the sign the treaty between Hurmu and New Batavia because it was in English. The Supreme Court followed the President's argument. The treaty was subsequently translated into Dutch and re-submitted to the Majlis-ash-Shura. 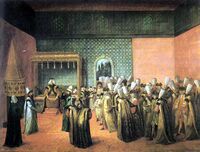 A meeting of the Diwan

The Diwan is composed of ordinary, extra-ordinary and co-opted members. At least half of the ordinary members have to be muslim by faith. It is in fact the only Islamic institution in the Islamic Republic. All other institutions are secular in nature.