The Vegno national football team is the football team which represents the micronation of Vegno. It is a member of the AEFA, and is run by the FCV.

The team was founded in early 2022 after Vegno's Micrasian claim was successful. The team's first participation was in the friendly tri-series tournament in Krasnovlac, against fellow FMF newcomers Krasnovlac and Pacary, which Vegno successfully won after two victories.

The team's crest was created in 2022 by the FCV following the foundation of the team to become the first official symbol of the Vegnese national side. The crest's design includes the flag of Vegno with the cormorant, the name of the nation and the abbreviation of the Vegnese football association, the Federazione Calcistica del Vegno. 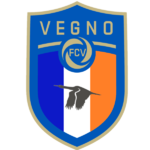 The first home and away kits of the Vegno national team were presented in April 2022, just before the beginning of the 2022 Krasnovlac Tri-Nations Series, the first matches for the team. The predominant colour of the home shirt is blue, with the names and numbers of players in white, while the shorts are orange, representing the colours of the Vegnese flag, though there is also the possibility that the shorts could also be white. The away kit is, on the other hand, totally white, with numbers and names of players in blue.

Vegno has used the following flag during the entirety of its FMF affiliation: