Johannes Klaron Djupvik (b. 1670 in Nordiskehjem) is a Norse-born Hurmu former socialite, HPC officer, and reluctant explorer, Commissioner of the Transprinitican District from 1702. Famous for being the grand-nephew of Liv Djupvik, he had spent his youth partying and doing reckless things, almost always being "saved" by his family. 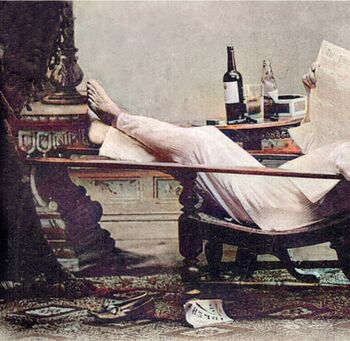 Son of Patrik Djupvik (1643– ) and Mikaela Klaron (1645– ), he has one elder brother Samuel Klaron Djupvik who appears to lead a normal and respectable life.

In 1691, the Order of the Holy Lakes, on the application of the mothers involved, confirmed that he had fathered four children with four different women in the years 1689–1691 (Simon Midergaard and Mattias Silk in 1689, Margot Suur in 1690, and Karla Sivertsen in 1691), and that it was currently reviewing the paternity cases of eight other children born during Johannes's teenage years. Johannes's family managed to get an injunction against the publication of any news regarding his children and family in Normark and Elwynn, but the Order of the Holy Lakes is not bound by it. As such, Hurmu media broke the news which were easily accessible to Normark due to shared language and cultural links.

On 9.IV.1691 AN, Johannes was greeted at the door of his Konungshjem apartment by the Bailiff of the city, accompanied by a bevy of cudgellers, who took great pleasure in informing him that the Court of the Prince had reviewed his exemption from National Service and found it to have been issued in error. Accordingly the exemption had been revoked and new call up papers issued which the Bailiff delivered to Johannes in person, congratulating him on the opportunity to do his bit in the Union Defence Force. Owing to his recent celebrity, a pair of cudgellers were assigned to Johannes for his personal protection, whilst a UDF media team ensconced themselves in his apartment, after evicting his companions of the previous night, and worked on preparing Johannes for a press call that would take place immediately prior to the commencement of his basic training.

At the ensuing press call, held at Nordiskehjem Depot on 14.IV.1691 immediately after he had been fitted out with his basic training service uniform, Johannes was obliged to patiently endure being publicly congratulated by no less a personage than Sigrid Årud for his prodigious contributions towards advancing the human supremacy. All this occurring as a not entirely inconsiderable media scrum watched and recorded. The first medal pinned to his chest was the Elwynnese Medal of Fatherhood with Oak Leave Clusters, apparently an invention of the Princess of Elwynn herself. Sigrid had smirkingly remarked, as Menig Djupvik hesitantly proffered a salute, that the promising young lad would doubtless be sent to the Southern District of Hurmu where the formerly forsaken would doubtless welcome his direct contribution to the performance of their civic duties. To this Johannes had merely blinked uncomprehendingly until the Regementsförvaltare who had been observing the spectacle from one side bellowed at the man to "stop day-dreaming and lower that fucking arm."

Instead of four years guarding well-appointed internment camps in Southern District Johannes instead found his period of service indefinitely extended as the Second Elwynnese Civil War tore through the Benacian portion of the Greater Elwynnese Realm. Following basic training and an period of duty at the Hagbard Garrison, Johannes was promoted to the rank of Korporal and assigned to the 3rd Brigade of the 81st Landsfördelning. For his continued misfortune, his first overseas posting would be on the island of Samholdsøya - an outpost on the edge of the frozen boreal hell which the loyalist forces would someday have to reconquer in order to restore the Boreal Air Bridge and direct communications between Normark and Eliria.

In 1697, Johannes Djupvik was transferred to Hurmu's Peace Academy where he underwent officer training for future service in the Hurmu Peace Corps. Graduating mid-table in the cohort from the Ghawlama campus for 1700 AN, Johannes received the rank of Officer of the Peace. His misfortune was to have made reference on his application form to his prior service on Samholdsøya, this saw his name included on the list put forward for the attention of the Senatorial Committee for the Hurmu Peace Corps when it came to selecting HPC officers to join the Warring Islands Volunteer Defence Force. Officer of the Peace Johannes Djupvik was duly summoned to Vesüha for an interview with Ardashir Babakan-e Osman. To Johannes' considerable mortification, not-only had he been chosen for a posting in the Warring Islands but he was to proceed via Normark on a route that would take him via the Dark Berry Islands, the Hexarchy, Nouvelle Alexandrie, and the Bassarid infested Strait of Haifa. Upon dismissal from the interview, Johannes was accosted by an adjutant and ushered into a side room for a series of lengthy briefings about his itinerary, the information he would be required to collate regarding troop dispositions, political situation, and piratical activity notable in each country along the route of his journey. After being released from this briefing, Johannes was afforded a night of respite with liberty to enjoy the city as he saw fit before being obliged to report to the ESB residency to receive a company ID card, a new suit, travel money, and be subjected to a further barrage of briefings concerning the ESB residencies in Keltia which would be responsible for facilitating his safe travels across a continent which was notoriously infested with horrors, be they human, animal, or supernatural, unsurpassed anywhere in the world save for perhaps on Corum. Finally he was informed that he would have one year in which to complete his journey and forward his final report to the Senate Committee.

The details of Johannes Djupvik's travails across the dark continent of Keltia during the year 1701 AN would remain under the sign and sigil of the Honourable Company and the Order of the Holy Lakes for the next forty-years. The importance of what he encountered whilst traversing the Strait of Haifa can perhaps be surmised by the fact that, upon his arrival in Port Esther and the submission of his final report he was immediately summoned, not to a Senate hearing but instead to the Sacred Lakes Lodge in Aqaba. Whatever his elation may have been at the prospect of attending a celebratory feast, it quickly dissipated upon learning that his feat had seen him nominated for a new endeavour. Over a substantial communal meal that consisted of roasted camel flesh, partially buried in a mound of couscous that almost surmounted the heaped meats, Johannes was informed of his good fortune in being invited to join an expedition into the former realm of Gralus to discover the whereabouts of two missing cohorts who had disappeared during peacekeeping missions out into the Green of northern Apollonia.

So it was, subsequent to that ultimately disagreeable meal, that he found himself on detached duty, reporting on 25.I.1702 AN to the HPC Cantonment of Niš Airport, where the expeditionary force was being assembled.

In 1706, news surfaced that Johannes had fathered 12 more children than previously known. All of his 16 children have different mothers. By a petition to the Order of the Holy Lakes, Johannes Klaron Djupvik changed the surnames of all his children to his own, Klaron Djupvik, and took formal responsibility of them.