The Craitland USSO membership referendum took place on 28.II.1658 AN throughout Craitland and its dependencies of Incontinentia, Lakkvia, New Vaduz and Zandarijn as a means of gauging public support towards either retaining or terminating the nation's full membership of the Union of States around the Sovereign Oceans.

The referendum's final results were published on 3.III.1658, with considerably greater support toward a "no" vote.

Craitland joined the USSO as a founding member of the organisation in 1645 AN. The USSO was initially created in response to heightening tensions surrounding the Hammish Civil War by five nations with varied vested interests in the conflict. Craitland's historical ties with Hamland, which was one of the nation's strongest relations for a number of years, was cited by then-Prime Minister Hjaņ Berntsen of the Social Democrats as a key reason for joining the USSO, as the USSO entered the war with Craitland's involvement restricted purely to supplying aid to people in affected areas. Since the war's end, the USSO's focus had included economic endeavours and migration policies, though controversy surrounding the Florian Republic's membership and subsequent ejection overshadowed the organisation's work.

Discontent towards the USSO among Craits began to emerge around the time of the Florian Republic's accession to membership, with policy regarding membership becoming an important issue in parties' manifestos and campaigns ahead of the general election in 1652 AN, in which the anti-USSO Liberal-Centre Alliance led by Iņa Aärnesen won a majority. Following Aärnesen's election, Craitish domestic politics had focused on holding a membership referendum, while the USSO had seen further involvement in conflict; the War of Lost Brothers fought over multiple continents becoming one of the bloodiest and drawn-out wars seen on Micras in recent memory. From the beginning of this war up until the run-up to the referendum date, anti-USSO sentiment in Craitland had since grown notably.

Following her party's successful election into power, Iņa Aärnesen timetabled a plan to hold the referendum in early 1658 AN. After discussions, the Craitish parliament ultimately voted to set the date as 28.II.1658; a decision first announced by Aärnesen on the social media site Whispr. The legislative branches of each of the four Craitish territories all voted unanimously to partake in the referendum.

Voting eligibility was established to match that of the mainland's general elections; namely registered citizens who are a minimum of 18 years of age with permanent residence in Craitish-owned territory.

To create a referendum that could be answered with a simple "yes" or "no" vote, it was decided that the question would be in regard to Craitland's full membership—the USSO offers three distinct tiers of association—and would ask whether the nation should retain its current status.

There were no officially-tabled campaigns for either side of the referendum's question, with political parties and lobby groups producing their own materials, albeit with cross-ideology groups regularly working together to compile campaigns. Campaigns to support maintaining USSO membership generally focused on the perceived militaristic and economic protection an alliance with Jingdao and Passio-Corum would bring, while campaigns against full membership concerned Craitland's international reputation and the view that associating with the organisation had increased the risk of threats from other nations.

With each territory of Craitland having had its own political setup, there were few parties which operated throughout the entire kingdom to a major degree, leading to a range of official stances from ideologically similar parties in different regions. Some parties' campaign stances were not officially disclosed—or an official neutral stance was declared—with their members occasionally being seen to align themselves to differing campaigns on personal conscience. 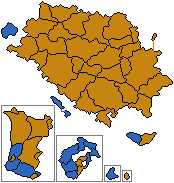 Yes
No
Of the 54 subdivisions which were used for supplying parliamentary seats in each territory's respective legislature, 13 saw a majority "yes" vote, as 41 returned for "no". Strongholds for "yes" included rural areas of Lakkvia and the entirety of Incontinentia.

The final result was published on 3.III.1658, following news sources having reported on a successful "no" vote from 1.III.1658, after polling and decisive counts predicted a considerable win. The official overall result saw "no" gain 68.5% of the vote—to 31.5% for "yes"—from a voting electorate of just under 12 million.

Results varied throughout the Craitish mainland and its territories, though ultimately all territories bar Incontinentia returned a majority for "no". Incontinentia, however, did see the most contrasted result, with 93% voting to remain a full USSO member; a result which commentators saw as being representative of the dependency's significant economic relation with the nearby Passio-Corum. The New Vaduzian vote returned the largest majority for "no", while the closest result was that of Lakkvia, which saw a difference of just under 5% in favour of "no" compared to "yes".

Following the official announcement of the referendum's result on 3.III.1658, the Craitish parliament undertook a number of debates and votes in regard to the outcome, and its significance in the nation's membership of and relationship with the USSO. The debates held shaped the Craitish approach to proceedings, with strong Social Democrat support for full membership in conjunction with an overwhelming "yes" decision in Incontinentia forging a path for a preference in amending Craitland's position within the organisation, rather than the nation severing all ties completely. These debates and their ultimate outcome, with the final parliamentary free vote on 29.III.1658 garnering well over 90% support, were widely praised by political commentators and the general public alike.

Prime Minister Iņa Aärnesen addressed the USSO Political Consultative Committee on 7.IV.1658—a delay on an initial plan for the address to occur on 3.IV.1658, following the unforeseen announcement of withdrawal of Gerenia from the organisation on 28.III.1658—and announced that Craitland requested for its full membership to be reduced to that of an observer. Upon Aärnesen entering the request, Craitland's role in the organisation was amended following one year's transition period on 7.IV.1659 AN.

Following the completion of Craitland's membership with the USSO being amended, support for Aärnesen's Liberal-Centre Alliance was sustained, with a second consecutive majority government for the party being confirmed in the general election of 1664 AN. While Aärnesen was ineligible to retain her Prime Minister position, her successor Maxine Karisson—who took a notably public role during campaigning for the referendum—led the party to an increased margin of victory amongst the voting electorate. In the same election, the Social Democrats—the party whose government took Craitland into the USSO and was the only one to officially campaign for "yes" on the mainland—recorded their worst ever return of parliamentary seats; signifying a clear downward shift in public opinion.