Christina Aguilar, more commonly known as Xtina, was born on 23.XII.1670 in Santiago, Santander. She is the niece of Jaime Augustin Joaquin Primo de Aguilar, Autokrator of Constancia and Prince of Molivadia. She has ambitions of being an entertainment personality of some repute.

She is a natural-born subject of Nouvelle Alexandrie, but due to her parentage, also holds a diplomatic passport of the Imperial State of Constancia.

Born in Santiago, Santander in the midst of the Wechua Sorrow. Her father, Javier, did not take advantage of the Wechu Exodus, despite the fact that his elder half-brother was Autokrator of Constancia. This decision, or lack thereof, may have been due to his alcoholism. Luckily, Christina survived early childhood thanks to the assiduous attentions of her mother, Rosalinda. Wanderlust led her to Punta Santiago, Alduria in time for the spectacle and excitement around the writing and development of the Proclamation of Punta Santiago, which brought her uncle to town as well as other family members. She survives on busking and silent, deniable, shoulder-length assistance of both the Imperial Constancian State Protection Authority as well as the ESB Group.

Xtina reached national and international fame when her identity was definitively blown by Muchachita, in a series of ambush interviews and lurid front page pictures, followed by alleged confessions in a series of special reports from the National Inquisitor from former flatmates, lovers of all genders, and even her alleged pimp and "manager", who was never seen or heard from again. Litigation by certain "concerned citizens", particularly from the Constancian diaspora, as well as a notoriously public slapping incident involving the editor of the National Daily Express and the President of the League of Imperial Constancian Loyalists only fueled the showbiz furor.

In spite of her desire to be taken seriously as a singer-songwriter, her standing as a media personality rests in large measure upon her familial connections, her interactions with the chicha press, and her antics in the somewhat louche nightlife of Punta Santiago, where she is treated as somewhat of a curiosity and an oddity amongst the jaded socialites of the Alexandrian and Caputian diasporas.

Those who had hoped that familiarity with Christina would serve as a springboard to an introduction to the Imperial Court in Astérapolis, the noble court in Molivadia, the Khanate Court in Raspur, or to the antechambers of the Honourable Company in Aqaba have reportedly been violently disabused of such notions. Certainly the rapidity with which ladies and gentlemen of a certain type drop out of her social circle, usually after a pointed conversation with certain discreet persons, has been a topic of conversation amongst the higher echelons of polite society. Rumors that certain individuals attempting to take liberties with Cristina's person have been disappeared with extreme prejudice are also the subject of Alduria-Wechuan coffeehouse and bar conversations.

A particularly scurrilous paid advertisement by Escándalo! parodying the Prince of Molivadia as a product endorser of Mausch & Keller's popular ibuprofen brand (claiming that "even my Xtina problems go away with this!") was greeted with litigation by the League of Imperial Constancian Loyalists. The Imperial Constancian Consulate-General at Punta Santiago continues to deny that the Prince of Molivadia is a user of Mausch & Keller's popular ibuprofen, claiming the lack of an Imperial Warrant for that specific product.

Xtina attempted to crash the wedding of Crown Prince Titu of Alduria-Wechua and Princess Abigail of Shireroth in Punta Santiago on 19.I.1688, but was visibly stopped at the gate, to the delight of the chicha press, which covered her being whisked away from the venue in a limousine by agents of the Imperial Constancian State Protection Authority. News reports from Nouvelle Alexandrie's National Broadcasting Corporation evening news that same day confirmed that she was "escorted to the Imperial Constancian Consulate-General" and "later had a quiet dinner with the Autokrator of Constancia and his family, aboard the Imperial Constancian Navy command ship Babak Shah".

Further reports that she had suffered a nervous breakdown as a result were rebuffed as "mere speculation of overzealous entertainment correspondents in need of higher circulation figures", according to the official spokesperson of the Imperial Constancian Consulate-General at Punta Santiago.

Publicly documented, particularly by the chicha press, to have been arrested and booked in a Punta Santiago district police precinct in the early hours of 20.II.1688 for disorderly behaviour while under the influence, she was later released, after 12 hours in solitary custody, on discovery and confirmation of her identity, as well as of awareness of her possession of a diplomatic passport of the Imperial State of Constancia. Intervention by officials of the Imperial Constancian Consulate-General at Punta Santiago were strenuously denied by their official spokesperson.

Aldurian government and police officials also denied that the fact that #FreeXtina trended nationally immediately after her arrest, after the widely-shared short video of Hopsy demanding her release, had any relationship with her eventual release.

Counter-protests at the news of the release of Christina Aguilar gathered pace in early 1688 as a loose coalition of anti-federalists, Constancian exiles, and anti-corruption activists, took to the streets to condemn and denounce a flagrant abuse of power and influence by a foreign power and subvert the rule of law.

On 10.III.1690, Christina was once again arrested - this time for her part in the closed-door decision to hire Jing performers to represent the Imperial State at the Microvision Song Contest in Shirekeep. In view of the Euran War looming large in the historical memory, and with the complicated relationship between the Raspur Pact and the USSO lingering into the present, the decision to hire Jing to sing paeans of praise to the Autokrator, who was not himself of Euran ancestry, was a decision so tone deaf as to give rise to accusations of deliberate sabotage. So it was that she found herself dragged from her bed at six in the morning, along with her intimate companions of the previous evening, much to the titillated delight of the chicha press, seemingly tipped off in advance of the police raid. As the arrest warrant had originated with the Political Directorate of Trans-Euran Command the efforts of officials of the Imperial Constancian Consulate-General, along with certain other discrete gentlemen of her entourage, to secure her release were in vain. While her lawyers had swiftly arrived at the District Court in Punta Santiago and were filing a complaint of unlawful arrest Christina had already been transferred into the custody of four well-built gentlemen sporting Tellian tailored suits and Benacian accents. Whisked into the back of a conspicuous black land-cruiser, she was driven out of town to a privately owned airfield and placed onto an unlisted Black Omega flight bound for Ithonion, an island in the Gulf of Aqabah heavily utilised by the Imperial Constancian Armed Forces.

During the debriefing that ensued she had been advised that, in view of her privileged familial relationship, her own personal circumstances were a good deal more favourable than those enjoyed by the majority of her associates on the production company with whom she had been working to put together the Constancian microvision entry. She was further advised that in return for her full cooperation with the ongoing enquiry her diplomatic passport would be returned to her and she would be free to depart wherever took her fancy. However, for her to enjoy once more the life to which she had lately, and so readily, become accustomed, it would be necessary for a small act of contrition. A televised ceremony was being organised whereby Christina, and her surviving companions, would make a formal apology to the Basileia, the Autokrator, and the Commander-in-Chief, and through them to the entire nation. For the full restoration of her privileges and honour - if she understood the term - she would be required to name the individuals guilty of sabotaging the song entry, so that the Autokrator might bestow his inimitable justice upon them, live on national television.

Relative absence from the public eye in these recent years was the subject of many rumors from the chicha press, with speculation claiming that she had renounced her worldly ways and taken up holy orders, forcibly recruited or enthusiastically enrolled into the Black Legions as a camp follower of ill-repute but of good reputation, or otherwise with (or without) child. The truth was that she was taken in as a guest resident of the Education & Indoctrination Service of Raspur, considering her relative age, and cross-enrolled in a Communications degree course with Euran University. Having successfully graduated in 1694, she took a minor administrative role in ESB Media, and due to her good behavior, was promoted to a minor advisory role in the Duke of Santiago Foundation. Rumors of her involvement in various illegal activites have been consistently greeted with litigation by the ESB Financial and Legal Directorate. 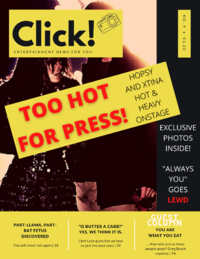 A cover of "Click!", a popular chicha press outlet in Nouvelle Alexandrie.

Around VII.1694, the chicha press strenuously insisted that assignations between Hopsy and Xtina took place, noting the convenient time periods where both personalities were absent from the public eye, which is deemed circumstantial and speculative by defenders of both parties. What is factually known is that Christina Aguilar took a commercial ICAC flight from Lindstrom to Shirekeep on 21.VII.1694 using her Nouvelle Alexandrie passport. Speculation abounds, and many await if she will be present at one of the many scheduled concerts in Shireroth where the Viscount of Hope will be present. The Imperial Constancian Embassy in Shirekeep refused to comment on the matter, merely stating on record that, "Provided that she adheres to the laws, the life of Ms. Aguilar is not the business of the Imperial State of Constancia."

On 23.VII.1694, Christina Aguilar performed in an act at Hopsy's concert. Their duet, "Always You", was released immediately afterwards as a single, and had never been performed before. The crowd went crazy of excitement during the surprise duet performance. In it, Hopsy and Aguilar danced intimately with one another, with the pair disrobing item by item throughout the song. By the time of the song's finish, both Hopsy and Aguilar were embracing one another, wearing nothing but their underwear. As the lights went down, it seemed to the crowd as if they were kissing in the Alexandrian way.

The Imperial Constancian Embassy in Shirekeep refused to comment on the matter the following morning, declaring, "This is not a matter for the Imperial State of Constancia."

In 1695, it was announced that she had put up her own production company, the unimaginatively-named Xtina Productions, domiciled in Punta Santiago and operating under the laws of the Federation of Nouvelle Alexandrie. According to the press release, capitalization for the company was sourced from fan donations and private investors. It was uncertain if Hopsy contributed to this.

By 1700 AN it is fair to say that most public records of such a person having ever existed had been thoroughly expunged within the territories of the Imperial State of Constancia. The instigator of this damnation of memory being a matter of discrete speculation. Xtina Productions was likewise purchased by ESB Media for a significant sum. No major changes took place in the management of the corporation, save for the fact that Christina Aguilar was deposed as President and promoted to Chairwoman.

In 1703, her husband/master (she's not his wife, but his concubine), Hopsy announced that she has given birth to a son, Ioakim Ivanovich Maksimilianovich-Shvinnskiy.

Upon the entry of her husband/master into the Senate of Hurmu, she also attempted to generate sufficient buzz to campaign for a seat of her own for the 1707_Hurmu_general_elections, posting a cryptic comment on her official social media account: Senator Christina Aguilar? 🤔

She was soon prevailed upon by unnamed individuals to reconsider, but sufficient groundswell of support resulted in a campaign for a candidacy to the Council of Punta Santiago, to represent the interests of "non-traditional" citizens.