The Parliament will meet for the first session of the 3rd legislature on early 1714 AN. Following the constitutional reform approved in 1708 by the Mancuso I Cabinet, each legislature will last from now on, from three to five years.

As the General Election of Vegno, population will vote both for the President of the Republic, with the two most voted candidates accessing the final ballot a week after, and for the composition of the Parliament, which will reflect the formation of the new government.

The electoral law in force is the "Rinaldellum", which regulated the previous elections of 1709 and provides for a mixed electoral system, where:

In accordance with the Constitution, modified by the Mancuso I Cabinet 150 deputies are elected. Furthermore, the composition of the parliament and the mandate of President of the Republic will now last for five years instead of three.

The voting paper, which is a single one for the majority and the proportional systems, shows the names of the candidates to single-member constituencies and in close conjunction with them the symbols of the linked lists for the proportional part, each one with a list of the relative candidates. The voter is able to cast their vote in three different ways, among them:

From the previous elections of 1709 AN for the 3rd legislature, a fragmented political framework had resulted: the Partito Popolare Vegnese had the relative majority of the Parliament as a single parliamentary group, while Forza Vegno was the most voted party in the country, having his secretary elected as President of the Republic. After nearly one month of difficult negotiations between the main parties, the President of the Republic Luca Zarrella entrusted the formation of the government to Shalva Mancuso, the secretary of the PPV. The Mancuso I Cabinet, supported by a Forza Vegno-PPV-PDC majority, took office on 1709 AN and adopted a liberal political line, characterized by the flag measures of the two majority parties.

The Mancuso I Cabinet has worked for 5 years, with the continous support of FV, PPV and PDC, not without critisims and critics from the opposition of PNV and PC. It managed anyway to end the legislature and a already months before the new election the parties started already their electoral campaign. 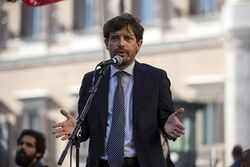 The former President of the Republic and Minister of Foreign Affairs, Antonio Visciglia doing and electoral rally in his home city of Sancrus, during an electoral tour in Vegno ahed of the 1714 Elections.

Following the dissolution of Parliament with the end of 2nd legislature, the electoral campaign officially began. Within the government coalition, the "Partito Democratico Costituzionale" (PDC) secretary Antonio Visciglia ruled out an alliance for the following elections with Luca Zarrella's Forza Vegno (FV), thus trying not to lose another slice of the left electorate to the advantage of the Communist Party (PC). Visciglia said that the government agreement with FV and PPV to reach a majority for the good of the country was not understood by all its electors and brought an "irreversible break" between the letf-wing electors. 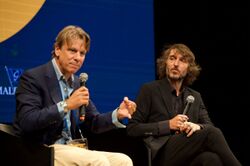 Mancuso during an electoral debate in the telecast of "Terza Torre", directed by Nicola Cavolo, ahed of the 1714 Vegno General Elections.

Zarrella accused Visciglia of being "arrogant and hypocritical",having first been in government for 8 years together with post-electoral agreements and then not agreeing to form this alliance in view of the elections of 1714. Mancuso and Partito Popolare Vegnese declared themselves to be part of the centre/centre-right pole and not distant from FV ideals; their campaign centered around the Flat-tax, already established for a part of the population, and the positive period Vegno had in the previous two governments . Visciglia criticized FV for their past nearness with PNV and nationalist measures. PDC ran for a wealth tax, minimum wage, support for civil rights such as egalitarian marriage, a law protecting against sexual orientation discrimination, and ius scholae reform to allow children of immigrants who live and study in Vegno to apply for citizenship.

In 1713 AN, the Partito Nazionalista Vegnese (PNV) and the Greens of Peppe Freeda (PF) officially launched their joint alliance for the upcoming election within the "Per il Vegno e per l'Ambiente" coalition, finding an agreement on many points of the program regarding the reclamation of some vegnese areas and on the theme of the environment. After a few days, Lèvati was appointed political leader of the alliance on a black–green platform.

In early 1714 there was another twist in the Vegnese political panorama: a centre coalition was formed before the elections, by Forza Vegno (FV) and Partito Popolare Vegnese (PPV). Zarrella and Mancuso found an agreement on the distribution of single-member districts between the allies and agreed also on the candidate for the Presidency of the Republic, which would be proposed by the party that gains more votes. They campaigned on a mixed-program based on the flat tax, constitutional reforms and minimum wage; though the two parties and leaders had their differences, and their manifesto lacked details they strongly focused on a favorable government experience in the past 5 years and also in the first government of Vegno. 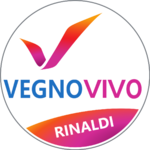 The new logo presented by H. Rinaldi for his new party "Vegno Vivo" ahed of the 1714 Vegno elections.

Finally in late 1714 AN Visciglia's PDC signed an alliance with Tito Bettella's Communist Party (PC). These alliance caused tensions between Visciglia and Rinaldi (one of the main PDC deputies and vice-secretary of the party). The latter, being a strong supporter of economic liberalism and nuclear power, considered impossible a coalition between himself and the far left-wing PC. So, Rinaldi broke the alliance with PDC, publicly declaring that "Visciglia has shit in his head"; with these strong statements, the relationship between the two great and historical exponents of the PDC seemed to have broken forever. PC, led by Tito Bettella and Edoardo Diotisalvi, decided to remain in the centre-left coalition with PDC, marking the end of the federation between them and Rinaldi. One month after, Haldi Rinaldi signed an agreement to create a centrist party led by himself and other dissidents from PDC, using a new symbol named "Vegno Vivo" (VV). The new party led by RInaldi, ran a pro-nuclear power, a pro-regasification campaign and a liberal program as solutions for the Vegnese Country.

Two months before the elections, Marco M. Unno (candidate for the PNV) tweeted a video of a rape committed by a 27-year-old Interland against a 55-year-old woman in the city of Sancrus, Falange. Visciglia immediately labeled Unno as "indecent", adding that "the Vegnese right-wing has no respect for the victim, not caring about her rights", while Tito Bettella stated that Unno should be ashamed of herself. Marco Unno accused Visciglia of lying, saying that the video was taken from the official website of a vegnese newspaper, adding that he did not have to apologize because it was done for solidarity with the victim.

As usual in Vegno, ahed of the 1714 general elections there were organized some electoral debates, on the main vegnese TV channel, between the leaders of the main candidates parties. Different from the past elections the Partito Indipendentista Vegnese will appear only in the constituencies of some regions and not in the national lists, and therefore loses the opportunity to participate in national debates. It will also be the first appearance of Haldi Rinaldi as leader and secretary of the Vegno Vivo party, at the first participation in national elections after the detachment from the PDC.