As clarified by the Constitution, the two most voted candidates for the presidency of the Republic will have access to the ballot; 122 members of parliament will instead be established with a proportional system, while the remaining 28 will be assigned, 2 for each region of Vegno, to the two most voted parties in each single region.

1709 AN Vegno Elections will take place in the first part of the year and will elect the second-ever Vegno President of the Republic and the second-ever Government. The outgoing President is Antonio Visciglia, which is the secretary of Partito Democratico Costituzionale and has already planned to re-candidate himself for a second mandate.

This will also be the first election after the 1707 Vegno Annexation Referendum, seeing so the participation of the regions of Ponente, Badia and Pelago, and a number clearly superior of population.

The Forza Vegno party, after the great success of the previous elections of 1706, in which it was the second most voted party in the country and after having maintained the government during the first term together with the PDC, is also one of the favorites. for subsequent elections.

The secretary, Luca Zarrella, one of the 7 founders of Vegno, and outgoing prime minister of the Zarrella I Cabinet, with the President of the Republic Visciglia.

The Forza Vegno program is based, as in the previous elections, on a moderate line, with particular attention to the middle class, development and self-sufficiency of the country. The solidity that the first government offered in terms of political support and national unity hopes they can play a fundamental role in the upcoming elections, despite a climate of slight dissent brought about by the birth of the new Communist and Independenceist parties.

The main proposal of the party was a tax reform based on the introduction of a flat tax; for Zarrella, it was initially based on the lowest current rate (23%) with the threshold raised to 12,000 Rin, then proceeding to a gradual reduction of the rate. The estimated cost of this measure was at around 25 billion Rin per year calculated with a 20% rate. Zarrella also proposed the cancellation of taxes on productivity, plus increase of minimum pensions to 1,000 Rin, the introduction of a "dignity income" to fight poverty, the end of contribution on youth recruitment. Within FV, there were some representatives of the Animalist Movement led by Nicoletta Carne, whose main focus was the banning of fur clothing and stricter controls in circuses, free veterinary care, and the establishment of an ombudsman for animal rights.

The PDC is the real outgoing winning party of the last elections, having triumphed in the presidential ones and having led the government thanks to the alliance with FV for all these 3 years and are aiming for a reconfirmation in these elections, also obtaining something more than 20% obtained in the last heat.

Their ideology hasn't changed and emphasizes mutual collaboration through liberal institutions, endorses a market economy and aims to insure a "positive liberty", seeking to enhance the "positive freedoms" of the poor and disadvantaged in society by means of government regulation. It supports a mixed economy of mainly private enterprise with some state provided or guaranteed public services (ex: obligatory universal health insurance, with the state paying a basic health insurance to the most poor of the society) and strongly defends human rights and civil liberties and it's opposed to isolationism and pushes for a foreign policy that can quickly place the nation in a diplomatically dominant role on the continent.

The PNV returns again to the Vegnese elections with its radical and almost extremist program, wanting to react to the defeat of the last elections, where it had obtained a sensational triumph with 30% in the parliamentarians, then being defeated at the last in the presidential elections and thus resulting the great loser of the last elections.

In the end they agreed to participate in the national unity government, with only two ministries to have a say: some voters agreed with this choice while others did not like to come to terms with the opposing political formations. 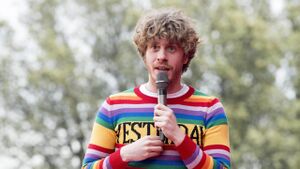 Tito Bettella, the leader of Communist Party, during an election rally in Murgione, Vegno, before the 1709 Elections.

Its cultural references are first and foremost inspired by the thought of Karl Marx, in order to achieve the complete realization of a modern socialist society in the context of a left in opposition to neoliberalism, an ally of authentically progressive forces, an exaltor of the anti-fascist resistance and respectful of the Constitution. The rejection of any form of discrimination is accompanied by a vision contrary to authoritarian, bureaucratic and degeneration of socialism.

The party undertakes to promote social justice and personal development, an adequate role of local autonomies and the sovereignty of the country, aware of the need for a coherent solidarity vocation in the Mediterranean region.

Other programmatic points concern on pensions and the fight against precariousness , the no to the flat tax proposed by Forza Vegno, the taxation of financial transactions, the abolition of the obligation to balance the budget, cancellation of health costs, significant cuts in military spending, which excludes the possibility of resorting to war as a means of resolving international disputes, the opposition to the use of nuclear energy, the introduction of the ius soli, the punctual application of the penalties provided for the offense of condoning the fascism, the abolition of life imprisonment, the recognition of same-sex marriages as a king of the universality of citizenship rights, the legalization of soft drugs.

The Partito Popolare Vegnese (Popular Vegnese Party), whom secretary and candidate for the Presidency of the Republic is Salvatore "Shalva Mancuso", has planned to re-candidate himself after a bad outcome in the last election.

The "PPV" gathers forces generally classifiable as moderate, Haldian-democratic and conservative in the sign of the liberal-conservative tradition.The PPV Secretary formulated an electoral manifesto ahead of the 1709 Vegno Elections, like he did on the previous one: The "Strong for the People" Manifesto states: Creating new jobs by continuing to invest in education and lifelong learning, Protectionism must be avoided, Fiscal and monetary policies need to be coordinated, Increase transparency and oversee financial markets; Making Vegno a market leader in green technologies, Increase the use of renewable energies, Flexibility for working parents in favor of families and Find a strategy to attract skilled workers from the rest of the world to make the Vegnese economy more competitive and dynamic.

The Vegnese Independence party presented itself for the first time in the elections of 1709, born from a clear intention to carry on the will of a slice of the population to return independent from the nation of Vegno.

The split was born with the 1707 Annexation Referendum, in which the roofs of the current regions of Ponente, Badia and Pelago were annexed to the Republic of Vegno; despite 78% of voters expressing a positive opinion, there was still a strong will of a small slice of the population to maintain their independence and this is the basis of the program of this new party: to regain the independence of those annexed territories or, at least, participate in the Vegnese political life guaranteeing the rights of the new population.

For the first time in Vegno general elections there were organized some electoral debates, on the main vegnese TV channel, between the leaders of the main candidates parties.