Sokoku Industries, formerly known as Heimat Industries, is a Jingdaoese - formerly Kildarian - company which was established in 1584 AN by the Kildarian entrepreneur Albert Heimat. The company had originally been a decent-sized mining company, but Albert dreamt big and transformed it into a conglomerate which included steel production and manufacturing of ammunition and armaments. 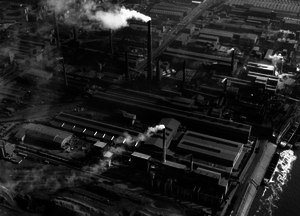 The company was established in the year 1584 AN by the family Heimat, a wealthy family from Dalmacija, which had noticed that Kildare was slowly industrialising as a result of Kildarian independence. Desiring a piece of the cake, Albert Heimat started purchasing minor companies with the profits of his mining company. Some risqué loans proved worthwhile and investors were eventually found to help with its further expansion.

Albert Heimat chose the town of Agnigrad as headquarters for his new company and gathered his other wealthy family members behind him to invest in a bankrupt company which exploited an old gold mine. This gave him the personnel and expertise to search for new areas with gold. His actions were successful and lead to the discovery of one of the largest gold veins ever being found in the County of Dalmacija. The new technology and machines which were used gave him the benefit to dig deeper and his many successes gave him the opportunity to ask for a monopoly over all gold exploitation within the County, which he got.

The profits Albert made were used to reinvest in new projects: he bought some iron mines in Absentia and started exploiting them. This gave the the opportunity to make quality steel, which was shipped to Dalmacija, where it was used to make several new products. Heimat Industries quickly started focusing on steel products, manufacturing of ammunition and armaments and ships.

A demise of the company followed around the year 5,000 ASC, but after the Revolution of 5552 massive investments by the new owner, Pollux Heimat, were successful as it became the sole supplier of the heavy dreadnought-type ships for the Navy.

During the start of the 7th millennium, Haribald Heimat announced the production of the Kattei-class battleships and the expansion of the company, after the purchase of 49% of the stocks by the Batavian government. An official move of the company headquarters to Koningin Siserawerf followed, as it became the main shipbuilding constructor of the Empire.

While the profits from the gold industry gave Heimat Industries a collateral to expand in the steel and weapon industry, the focus lies on the creation of new weapons and ships.