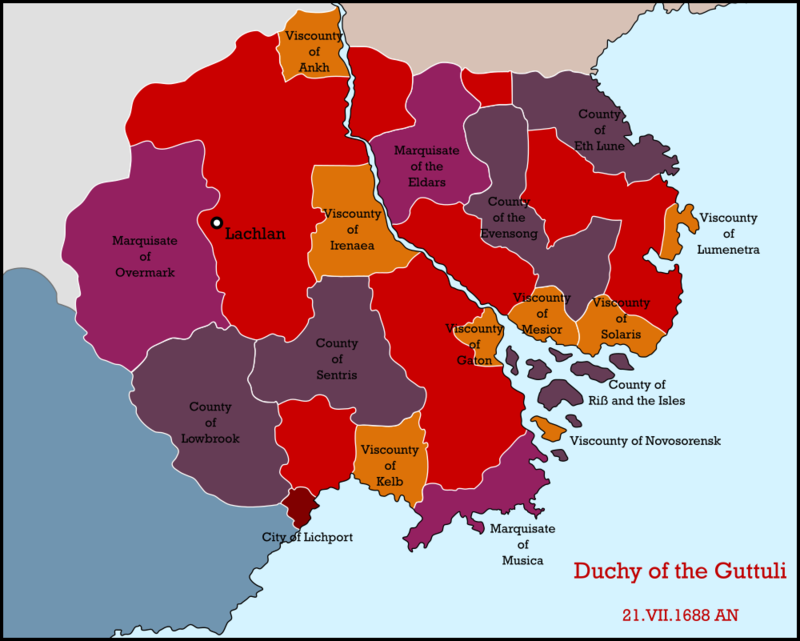 The Viscounty is governed absolutely by Esmeralda al-Osman in accordance with Imperial Decree of the Kaiseress Salome. On I.8.1688, the Viscountess issued a Decree, appointing her niece, Elia Simrani-Osman as Governor with plenipotentiary powers, until her resignation from the post in 1690. On VI.1.1694, Mariyam Guadalim was appointed resident Governor. Visited in person by the Princess Esmeralda during her late 1696 inspection and tour of her domains.

Defence and Security within the Tuszæl of Lumenetra is provided by two cohorts of locally raised amphibious infantry organised by the Imperial Circuit of the Far Guttuli and placed under the command of the Ducal Army of the Guttuli. In the event of an attack, the Viscounty would be reinforced by infantry deployed from neighbouring districts as well as elements of armour and self-propelled artillery provided by formations held by higher ducal command in reserve.

Naval support would be limited, with three corvettes of the Sea Corps of the Guttuli maintained at Lichport. The Bætrsuir-class corvettes appear to be modernised evolutions of the long-serving Elwynn-class corvettes found in the navies of the Raspur Pact. The Imperial Navy of Shireroth is also known to have two modern attack submarines operating in the Shire Sea, between Guttuli and Kezan.

No ducal air service is currently maintained which could provide support to the Viscounty in the event of an attack. Accordingly there would be an interval until air assets maintained by the Palatini Corps could arrive over the Far Guttuli region.

When mobilised, the "Tuszæl Lumenetra" would fall under the command of the Lockenhasp Association, commanded by the Standard Bearer Kyt Tḥak'ušynin, Count of Eth Lune.

There is a tacit agreement and mutual understanding between the governments of the Viscounty of Lumenetra and the Principality of Arboria (as they share a leader via personal union) that the civil and military forces of either polity would come to the assistance of the other.

A Decree declaring the Imperial and Emirati Bank of the Sathrati Islands as the official depository for the Viscounty of Lumenetra and the Treasury thereof was issued on I.8.1688, thereafter economic development was localized in accordance with needs as seen by Governor Elia Simrani-Osman. Economic development of the Viscounty began in earnest in 1692, with the onset of the Second Elwynnese Civil War, resulting in the development of an industrial-capacity commercial port, as well as a settlement to support all this.

The beginning of 1694 saw the incorporation of Ahvaz Lumenetra Automotive Engineering Company, a subsidiary of the eponymous automotive manufacturer, in the Viscounty. 1696 saw the beginning of the construction of the coastal highway with a wide promenade and active transport facility provisioning, enabling and encouraging the use of bicycles, as well as generous support for public and mass transport.

The Isthmus is the primary metropolitan area and is considered prime property, linking the Peninsula, Promontory Point, Harborside and the Shoreside and Shoreline residential areas. There has been an increased local movement to designate the port and harbor area as a separate civil-political city with the tentative name of Anchorage.

In 1699, a branch of Entrepreneurship Services Bank was opened, to engage in lending and commercial services targeted to small and medium enterprises. Later that same year, disclosures from the so-called Iron Harbour Papers revealed the existence of a private bank, Benacia City Bank & Trust, domiciled in the said location.