The Free Associative Kingdom of Constancia was a forum-based micronation, claiming land on the continent of Eura, on Micras. The project started in the year 1627 AN and has since developed significantly.

Ruled by the Basileus, or Basileusa if a woman, significant power has been delegated to the Mesazōn who heads Constancia's government. The Kingdom has been shaped by various cultures and enjoys historical ties with the British and the Byzantine Empires. After The Return to the Origins Act 2016 passed however, the country returned to its ancient origins and once again gave domination to the Byzantipe-type heritage.

The Free and Associative Kingdom of Constancia was located in the continent of Eura. 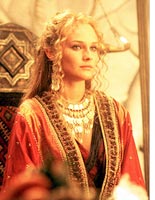 Basileusa Cleo is the spouse and consort of Basileus Petros III. As his health started to diminish in early 2016, on the 17th of March 2016 Petros III proclaimed her Autokrateira of Constancia, a position similar to that of a regent. While Petros III remains Sovereign of the Kingdom, Cleo is acting in his name and on his behalf on most occasions.

The Kingdom of Constancia is a constitutional monarchy based on The Constitutional Settlement Act of 1847. The Act outlines the role of the Basileus, His Government, the Synklētos and The High Court of the Realm. The four institutions provide the full constitutional framework of the Kingdom.

The role of the Basileus is not limited to ceremonial responsibilities only. He represents the country, dealing with Constancia's foreign policy, including matters related to the Micras community. Furthermore, the Sovereign participates actively in the process of instituting Acts of the Synklētos - by proposing bills on its floor and by assenting to passed ones via Vasilikí Singatáthesi.

The government is led by the Mesazōn who is usually the leader of the largest party in the Synklētos. The Mesazōn is mainly responsible for the day-to-day administration of the country and holds most of the executive power. Using the royal prerogative, he can became all-powerful for as long as he enjoys the confidence of the Synklētos. The position, however, is not permanent and occasionaly becomes vacant. During such vacancies, the Sovereign summons royal the prerogative back and exercises the executive functions of the Head of Government.

The recent war had damaged much state and private infrastructure, and killed a significant part of the workforce, as well as a great part of the civilian population. At the moment, the Free Associative Kingdom had quite the surplus in mined shinies - due to the nature of the government, all of which, under law, the personal property of the Basileus. They did quite the burgeoning trade with that with the rest of Micras, all of whom had quite the infatuation with the things, particularly those of the female persuasion. Then there were, of course, the more secretive business dealings of the other state-owned mining corporation. This was why residents of the Krýon theme had a reputation of being wealthy, thanks to steady employment in these nationally-important endeavors.

Thanks to this, the Constancian government received quite the significant amount of “hard” foreign currency (Króna, Natopos, Erbs, and Cräites, being the favorites, alongside the pegged-at-par Mercury Credit), with which the nation and its people purchased the necessary foreign commodities, food being one of them. The Kingdom’s typical diet of seafood, lentil, lamb, goat, fowl, homegrown vegetables and flatbreads, even with the gracious assistance provided by the Farming Subsidy Act, was often supplanted by copious amounts of bagels, fruit juice, milk and associated dairy products like cheese, thanks to its more prosperous and agriculturally blessed Natopian neighbor. Even he found himself yearning for these from time to time. They’d all developed quite the taste for it, and it was only by the grace of Bous that they were able to receive periodic ship deliveries at the best possible trade rates.

Be that as it may, it was only with generous foreign aid and assistance that the Kingdom was afloat. The sudden collapse of the Empire was significant to Constancia, for not only had it lost a source of private investment, it had also lost another important, but less publicized source of revenue: remittances from emigrant workers. Despite its seeming failings, there was much room in Alexandrian business, and particularly the service sector for a skilled or semi-skilled Constancian worker. The Cibolan continent was rather like another humble Constancia product, the sponge, absorbing the Kingdom’s labor supply and putting it too good use. There were still others in Stormark, Shireroth, Natopia and elsewhere, but time was needed to make up for the shortfall, time which was in precious short supply.

For the moment, a free regime of foreign currency transactions prevailed in Constancian marketplaces, with the government (central or otherwise), barely receiving what he considered its fair, if not requisite, share.

All things considered, there was an obvious, if not evident, balance-of-payments problem that would only grow, compounded by national government budget deficits once the Dikastis discovered that they could purchase popular support with the people’s money.

International transportation to and from Constancia is served by air and sea transport.

Ryker Airships maintains a daily cargo and passenger service between Shirekeep and Vey, in accordance with treaty.