The team has existed three times in the FMF's history; firstly between late 2007 and mid-2014 as an independent nation, autonomous territory of Ocia and West Ocia, constituent nation of Elwynn, Victoria and Gralus, and protectorate of Natopia, secondly between 2014 and late 2015 again independently, and thirdly since mid-2020 as an autonomous region of Elwynn and the Benacian Union.

The Amokolian team joined the FMF in late 2007 after originally not being involved with Micrasian football for the first year of the organisation's existence. Amokolia successfully bid to host the following year's World Cup after previously playing only one friendly match. Prior to the finals, the nation was annexed by Gralus. In the finals themselves, the team surpassed expectation by advancing from their group, with seven points, before being beaten 4–3 by Alexandria in a tight quarter-final encounter. Following the tournament, Amokolia regained its independence after the collapse of Gralus.

Amokolia was annexed by West Ocia in mid-2009, before the beginning of the year's qualifiers, where the team could only manage to finish fourth in their five-team group. After West Ocia reunified with East Ocia later in the year, Amokolia became a territory of the newly-reunified Ocia.

In late 2009, Amokolia again changed hands, becoming a constituent nation of Victoria but still retaining its separate FMF membership. In the 2010 qualifiers, the team finished bottom of their four-team group with five points.

In early 2011, Amokolia was annexed by Elwynn and became a constituent nation with its own national team. Soon after, the team competed in the qualifiers for the 2011 FMF World Cup, where they finished fifth in the WMFA's sole six-team group, two points ahead of parent nation Elwynn.

In the 2012 qualifiers, the team finished third in their five-team group with ten points.

In the following year's qualification, the team finished second in their four-team group with nine points, one point above Batavia, but missed-out on qualifying for a first Benacia Cup. During the qualifiers, Amokolia became a protectorate of Natopia after Elwynn reduced its land claims and was annexed by Shireroth. Following qualifying, the team competed in the second Senyan School International Tournament, where they topped their three-team group, above Tiana on goal difference, and won their semi-final before being beaten 3–2 in the final by Senya.

The team finished third in their four-team 2014 qualifying group with five points. Soon afterwards, Amokolia left Micras after Natopia reduced its land claims, but returned once again as an independent nation later in the year.

In the following year's qualifiers, the team finished third in their four-team group with seven points. Amokolia once again left Micras in late 2015.

Following Elwynn's annexation of West Amokolia in mid-2020, a unified Amokolia was once again reëstablished on Micras as an autonomous region. Ahead of the 2021 World Cup qualifiers, in late 2020, the team entered the inaugural edition of the Raspur Pact Nations League and competed in its top tier, finishing bottom of their four-team group with two points to be relegated. In the qualifiers, the team placed third in their five-team group with twelve points.

In early 2022, prior to the year's Benacia Cup qualifiers, Amokolia became an autonomous region of the Benacian Union following the merger of Elwynn with the Unified Governorates and retained its FMF membership. In the qualifiers themselves, the team finished fourth in their five-team group with eight points. 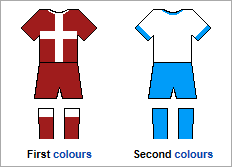 Amokolia has used the following flags during its three FMF affiliations: