Port Balaine (/pɔɹt baleɪn/ Port Bal-ayn; Toki Wawa: telo esun Palin), officially the Commonwealth of Port Balaine, is an equatorial, island country on Micras, located in an archipelago at the southern end of Apollonia on the North Raynor Sea. It is an authoritarian one-party-dominant kritarchy.

The name of the commonwealth comes from the Old Alexandrian word "Balaine" for "whale." Port Balaine in its early history was a significant commercial center for whaling and served as a whaling port into early modern times. 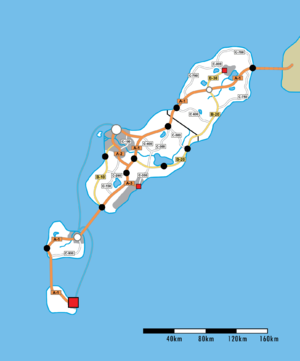 Port Balaine consists of small archipelago of three islands in the North Raynor Sea, at the southern end of the Apollonia continent. The smallest island, Herm, is home to the capital city, The Promenade. The middle island, but only somewhat larger than Herm, is the Island of St. Peter. The largest island, dwarfing both Herm and St. Peter combined by six times, is Wells.

Port Balaine further administers an Antarctic research, scientific and military base near the Micras South Pole, Hameln Station. The station is manned year-round, with a nominal staff of scientists and naval personnel, resupplied by rotating naval icebreakers.

The executive of Port Balaine is directorial, yet retains significant enshrined power. The Council of Ministers is responsible for appointing all political offices throughout the commonwealth, appointing all judges, and managing the various ministries of the central government. The seven ministers are elected to staggered seven-year terms by the Assembly of Keys, but are not subject to votes of confidence. The Chief Minister, the effective head of state and government, is elected by the council from amongst its ranks.

Each minister also manages one of the ministries of government, which consist of: State, Military Affairs, the Treasury, the Interior, Foreign Affairs, Development, and Public Services. 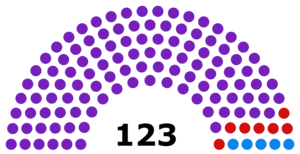 The Assembly of Keys is the commonwealth legislature. The Assembly has the power to pass laws and spending bills for the government. All matters before the Assembly must be placed on the agenda by the Council of Ministers. No other business may be considered.

Three political parties are represented in the 123-seat legislature: Justice & Harmony (111 seats), People's Action (7) and New Balainese (5). Members of the Assembly of Keys (MAK) are elected through party-list proportional elections. Elections are held in each of the four ridings: The Promenade (30 seats), St. Peter (17), Wellingdon (32) and Wells (44).

Port Balaine is administered by a unitary judiciary, hearing cases in both law and equity. The commonwealth follows a system of common law.

Two appellate courts manage appeals as of right in Port Balaine. The 1st Circuit Court of Errors & Appeals (1st Cir.) hears cases from The Promenade, St. Peter, and Specialties. The 2nd Circuit (2nd Cir.) hears cases from Wellingdon and Wells. Further appeals may be taken to the Council of Ministers, if granted by petition from the appeals courts.

The judges of the magistrate and district courts and the justices of the appeals courts must all be licensed lawyers, since the abolition of lay judges in 1674.

Istvanistani and Toki Wawa are the official languages of the commonwealth. Istvanistani is almost universally spoken and serves as the language of every-day speech, and is the sole language of government administration. By law, "cultural" establishments must furnish their products, such as menus in restaurants, at minimum in Toki Wawa. Toki Wawa is also taught as a literary language in Balainese schools.