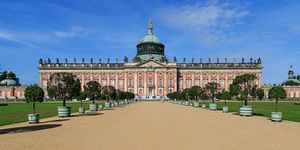 Front of the palace 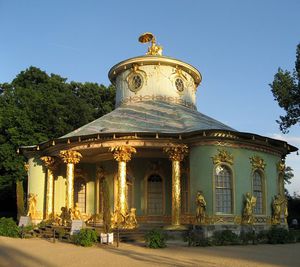 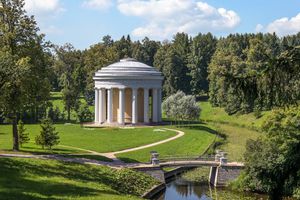 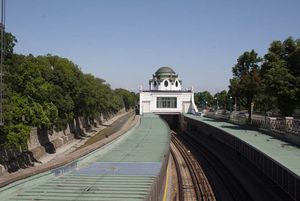 The Arkadius Palace (Germanian: Arkadius Palais) is a palace of Arkadius I southwest of Brandenburg. The building was built in 1673 AN. The palace serves as the residential palace of the Emperor of Francia and his family. The Hofburg, the emperor's work palace, is located in the center of the city, which was built in 1678.

Already at the invitation to have Arkadius Frederik Gustavus des Vinandy crown as king of Amokolia, it was considered to build a royal palace. In view of the fact that the old capital of Amokolia, Anun, and other old cities such as Petersburg, it was decided to build a new capital: Brandenburg. A new royal palace was to be built in this new capital.

The military council of Amokolia had to release more money for the Amokolian Highlanders in their fight against terrorism and the defense of national borders, which would postpone the construction of the palace. The council was ashamed that there would be no residence available for the king for the time being. The king found out and financed the construction of the palace from his own resources. This should remain secret, but the Brandenburger Post found out and published about it. After that, the until then nameless palace was called the "Arkadius Palais".

The immediate area is largely owned by the Kaiser, which mainly contains a forested area. This is to prevent the palace from being built in by the growing city of Brandenburg. This area is called Noreia Park.

In the gardens of the palace is a Jingdaoese House (Germanian: Jingdaosian Haus), this is a tea pavilion. The king had this built out of appreciation for the Jingdaoese culture.

In addition, the king had a Temple of Friendship (Germanian: Freundschaftstempel) built. In this temple a bust of Vidar Salim Livarson Ayreon-Kalirion ibn al-Majeed al-Osman bin Sathrati or Waffel-Paine can be found. An eternal flame keeps the memory of the emperor alive.

Near the palace is a imperial train station, called Hofpavillon Brandenburg. The royal train can depart from here to all parts of Francia Media, as well as to Blanckenhof Palace near 's Koningenwaarde in Batavia, which also has its own train station. The Orient Express would have stopped here.

The park surrounding the palace is called the Noreia Park. This park offers space for recreation for the city dwellers of Brandenburg, but also a memorial to the Froyalan Genocide is erected in this park.