Sarah Dravot-Osman, Countess Palatine of Mirioth and Amity, Lady of the Holy Lakes, was a politician and business leader, married to Aurangzeb Tokaraizadeh al-Osman. She was Chairman of the ESB Group from 1.V.1668 to 1.III.1704.

She was appointed as Director for Euran Operations of the ESB-Jörmungandr_Group on 5.XIII.1652, and concurrently took a seat at its Board of Directors, elected to Chairmanship of the Group 16 years later. Elected Chairman and member of the Board of Directors of the Atacama Corporation in 1663, and remained at that position until 22.XV.1695.

In recognition of her economic and political influence, she was appointed Imperial Senator of the Imperial Synkletos of the Imperial State of Constancia in 1667. On the death of Isabella Simrani-Kalirion, with the strong support of varied Euran interests, she was easily elected International Chair of the Nationalist & Humanist Party, and consolidated leadership thereof, duly ratified by the Nationalist and Humanist World Congress in 1683, of which she was also elected Chair.

Awarded the honour and dignity of being addressed as "Heroine of the Revolution" in 1689 for the contributions of N&H Party to the successful revolution in Zeed. 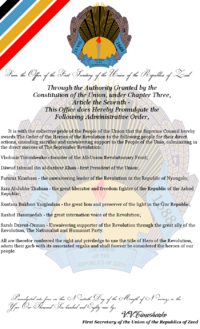 Decree of the Union of the Republics of Zeed, awarding Sarah Dravot-Osman the honorary title "Hero of the Revolution" for the part played by the N&H in the September Revolution

Acclaimed as Archon of the National Sector Party for Constancia, in spite of facing rumours of a coup in the party against her leadership on account of her advanced age, on 10.I.1694 AN.

She has a son, Daniyal Aurangzeb Kalirion-Osman, who married Miranda Isabella Anders in 1684.

On her retirement as Chairman of the Honorable Company in 1.III.1704, she was appointed Chairwoman Emeritus of the ESB Foundation.

Her passing, in her chambers in the port city of Aqaba, was reported by the Honourable Company to have taken place on 14.XII.1715. The deathbed had been attended by close family and senior company board members. The cause of death was given as natural causes. A funeral pyre and grand commemoration was subsequently prepared in the cantonments of the Honourable Company.