The team was seen as the spiritual successor of Hurmu in that the vast majority of its players originated from this nation's team, but it did not retain its records.

Lakkvia applied successfully to join the FMF after the territory was founded by Craitland in late 2013. In the following year's qualifiers, the team finished second in their six-team group with twenty points to reach the 2014 Copa Apollonia, where they could only draw one match and finished bottom of their group.

The team topped their four-team 2017 World Cup qualifying group unbeaten with 16 points to qualify for a second finals. In the World Cup, the team finished third in their group with seven points to advance to the play-off round for a second successive finals, where they were beaten 2–0 by Vyktory.

The team competed in the 2018 Copa Apollonia qualification rounds, where their fortunes dipped as they could only finish fourth in their six-team group with 16 points.

Lakkvia's struggles continued into the 2019 World Cup qualifiers, where they finished second in their five-team group with 16 points.

In the following year's Copa Apollonia qualifiers, the team finished second in their six-team group with 21 points and reached their first finals tournament in three years. In the finals, the team finished bottom of their three-team group after losing both of their matches. Lakkvia left Micras in late 2020 after the territory was merged with the Hurmu Trust Territory to reform Hurmu.

Lakkvia's traditional home colours were those used on the nation's flag, and the home strip was predominantly blue, while the away kit was usually either white or black. 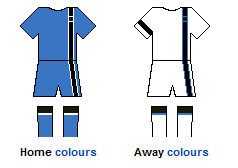 Lakkvia used the following flag during the entirety of its FMF affiliation: