The Lucerne national football team was the football team which represented the Mercurian autonomous territory of Lucerne. It was a member of the CTFA, after originally being affiliated to the AEFA, and was run by the FLV. The team is the official predecessor of Lusa.

Lucerne applied successfully to join the FMF after the territory was founded by Mercury in mid-2012. Later in the year, the team competed in the first Territories Cup, where they finished fourth in the football tournament, losing by 13–0 to Mercury in the process.

In their first World Cup qualifying, the team finished bottom of their five-team group after losing all eight of their matches, including a record 16–0 loss to Novatainia. Soon afterwards, the team competed in the inaugural Antarctic Shield, finishing third after losing both their games.

The following year, the team again finished bottom of their qualifying group with a sole point after being able to only draw one of their matches. Soon afterwards, the team switched their allegiance to the CTFA confederation. Later in the year, the team entered the inaugural Emerging Nations Cup, where they won their first ever match in the semi-finals before losing the final to the River Warriors.

In 2015's qualifiers, the team could only draw one of their games as they finished bottom of their five-team group.

The qualifying rounds for CiboTap 2016 saw the team finish bottom of their five-team group with one point to their name. Later in the year, the team competed in the 2016 Emerging Nations Cup; winning their quarter-final before losing their semi-final and third-place match to place fourth.

Lucerne finished bottom of their four-team 2017 World Cup qualifying group after losing all of their matches. Shortly afterwards, the team played in the 2017 Emerging Nations Cup and lost their quarter-final to hosts Blackstone. Later in the year, Lucerne was succeeded by Lusa. 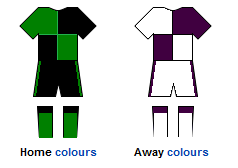 Lucerne used the following flag during the entirety of its FMF affiliation: