Nathan Ludwig Elijah Waffel-Paine of Drak is the first-born son of Nathan II, the Emperor of Natopia. He was born at Royal Memorial Hospital in Anmutstadt, Flaventia, on 25 Blumuar 1671. He is the presumed heir to the Natopian throne. He was conceived as a clone of his father, although genetic material from his father was altered to not result in an identical clone. This also allowed for his quadruplet siblings, Vadoma, Leonora, and John to not be born as identical quadruplets. His step-father is Ayreon IV of Shireroth.

Luddy, as his family, nurses, and governesses affectionately refer to him as, acquired his distinctive horn and hooves as a result from "a quirk" in the cloning process. The process was developed by military scientists from Hergon, Athlon who required a way to replenish members of the Satyric Guard without introducing any more genetic material that could create unstable zygoats. The satyrs created by the Hergoni military scientists were a robust new race of goatmen, believed to be genetically stable for most of natural lifespan, but unable to procreate. The plan was to grow new satyrs in artificial wombs as existing satyrs died or grew too old. The cloned satyrs would be created from the satyr's stem cells and a goat's egg with all the goat DNA "scooped out."

The Natopian Emperor requested use of four artificial wombs to clone four children. The zygoat that would become Luddy was unintentionally contaminated with satyr DNA, resulting in the baby having horns and hooves, but otherwise being healthy and human. This additional satyr DNA perhaps contributed to the zygoat being more active and vibrant than his sisters and brother, which was the deciding factor in inducing his birth first and allowing him to become the presumed heir to Nathan II.

Ludwig immediately captured the fascination of the public. As a gift to the Imperial family the famed Andrino artist, Gianni Bornino, sculpted a loving tribute to the two brothers being cared for by a mother goat, an allegory of the Natopian Nation. As the future emperor, he is already referred to as Nathan III. The birth of Ludwig also gave the Satyric Guard a much-needed bump to their public perception, the satyr guardsmen, strong and robust, fearsome and intimidating were proud to hypothesize that the new infant would inherit the strength and fortitude of the satyr, which assuaged the fears of the public that the baby was a genetic freak and oddity. Public perception quickly shifted after hearing of trouble in Shirekeep, and the idea of a strong and intimidating future leader became appealing in these uncertain times. Initial confusion and distrust of the human-satyr infant gave way to adoration as the public saw over several weeks the love and devotion given to Luwdig by his fathers and other family members. 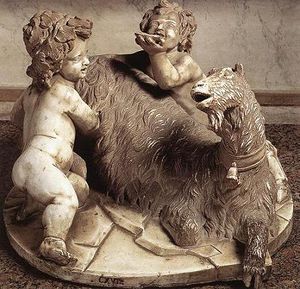 Ludwig formally entered into public service after his tenth birthday. He was designated heir to the kingdom of Ziegeland and therefore the next in line to be Faro of the Flaventia. He replaced his aunt, Clara Sundara as Duke of Hazelwood, the formal title for next in line to the faronic throne.

In 1863-1684, Luddy, along with his two sisters, moved from Anmuststadt to Lindstrom and all began their studies at the Nathan & Elijah College Preparatory School, fall semester 1683, located in northern Lindstrom. NECPS was considered to be the most prestigious high school in the capital city. During his first year, Luddy became acquainted with the children of Representatives, Secretaries, CEOs, foreign Ambassadors, and a few children of foreign royals and nobles. He was constantly surrounded by people and attention, and soon it became distracting. At the end of his first semester he was in danger of failing several classes. His father made the decision to send him to Anshin University High School, in Andiopolis. It was an historic college in a small city, and Nathan II hoped his son would thrive in a smaller, slower-paced environment.

Whereas in Lindstrom, Luddy's half-satyr features were well-known, celebrated, and honored; outside of the capital his goat-like features were less-commonly shown in media. His first day at AUHS, spring semester 1684, in the middle of the school year no less, was quite difficult for him. He jumped at the chance to get rid of his baby name, and introduced himself as Eli to teachers and students at his new school. Although he was not teased (everyone knew who he was) he was avoided. Eli quickly realized that his "friends" in the capital were perhaps only being his friends because of who he was and what their relationship would get them. Eli speculated that since they were all children of important people, their parents forced them to be friends with him so that they could possibly have the future, or current, emperor's ear. Andiopolis was a nice, yet unimportant city, no one needed, or wanted, to suck up to him here.

The rest of the semester was a lonely experience for Eli. He corresponded with his sisters frequently and every so often he would get a message from his brother John. Eli was immensely jealous of John, he was fully human and already asked to become the king of the Draconians. Eli was stuck here, with no friends, going to school until he was 18. At least at that time, Eli thought, his dad would let him take over some of the day to day governing of Flaventia.

In the summer of 1684, Eli toured Flaventia with his sisters, as was required by his father. This summer he visited Myrtilis, Tassity, Ashington, and Rostock. Myrtilis was a fascinating city, founded by Anticans years ago. He had been to Tassity many times, and was forced to participate in some ceremonies for the mayor. He hated ceremonies. Because of his legs, his formal uniforms used a kilt instead of pants and he thought it looked like a skirt despite everyone telling him "kilts aren't skirts! They are very manly." In Ashington he had more ceremonies, mostly because not many people came out that far. He met his cousin, Gwyn Moonoak, for the first time, but was just some old man. In Rostock, he toured the crystal mines north of town, and found that somewhat interesting. He attended some ceremonial ship launchings at the Rostock Shipyward where his sisters christened a few new ships.

In the fall of 1684, Eli returned to AUHS. The few students who hung around him were excited to share their summers of camping, amusement parks, and video games. He was embarrassed to say what he did, and just said he stayed at home. There was a new student this year, a small, sickly-looking kid by the name of Makhmud Kalimatov. Eli began to notice Makhmud was always following him around between classes, sat at the table next to him in lunch, and tried to get a locker next to his at P.E., but never spoke to him. After a few weeks, Eli finally had enough and wanted to know what Makhmud wanted. Makhmud kept his eyes on the ground as he spoke, "M-m-master... uh... Majesty? Highness?" Eli held up his hand, "Just Eli is fine for now. And look at me when you speak to me please." Makhmud nodded, then slowly raised his head, "Eli, I can't believe I'm in the same school as you. I've seen you on TV a few times, and I think you're amazing. I- I moved here. My parents fled from Raynor Point and we were resettled here. I can't believe you're real," Makhmud looked up and down Eli, lingering on his hooves and horns, "You are magnificent."

Eli took a few steps backwards. "Ah, you're Drak-Modani? So you're a Capric-Bovic? You... you use ..ugh...goat's milk... in your religious services?" Makhmud moved closer, "Yes, it's how I was raised. The goat is a magnificent creature, I always thought it was more worthy of reverence, than say... a cow." Eli's eyes got very wide, "That's borderline heretical," then Eli thought for a second, noticing the fear in Makhmud's eyes, "But that's kinda cool too. If you stop following me, and start hanging out with me instead, maybe we can be friends?" Makhmud's face lit up and he eagerly agreed, bowing his head and thanking Eli over and over for his graciousness. Eli thought to himself that he either just gained a fiercely loyal friend, or a fanatical disciple. But he was so lonely, maybe it didn't matter.