Elisabeth Asara des Vinandy, Princess of Austrasia ('s Koningenwaarde, 1 XV 1674 AN) is the crown princess of the Kingdom of Batavia and the Grand Duchy of Helderbourgh. She is the oldest child of King Arkadius Frederik Gustavus des Vinandy and Clara Sundara Waffel-Paine. Right from birth, she is the first in line to the succession to the throne of Batavia and Helderbourgh, but not for the succession of Francia. 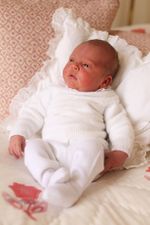 Elisabeth Asara, a few days after her birth

Royal standard of the Princess of Austrasia

Princess Elisabeth Asara was born in the Blanckenhof Palace in ‘s Koningenwaarde. Moments after birth, the king ordered the firing of salute shots. In Batavia, 101 salute shots were fired by the Ingelburgse Hunters every 10 seconds. The Amokolian Highlanders in Brandenburg and the Helderbourgh Armed Forces in Helderbourgh Stadt did the same. The national flag was hoisted on all government buildings in the three countries.

Shots were also fired away in Ravaria in honour of her birth. Two 62-gun salutes were fired simultaneously by the Fleur de Lys-Longships Guard in the Godsgroves of Tecklenburg Palace and Aakenie Hall. [1] Because Elisabeth is a great-great-granddaughter of Lady Æsileif Haraldsdóttir of the Houses of Vinandy de Ravarie and Ettlingar Freyu. In addition, birth gifts were also given to Elisabeth. [2]

Her parents' marriage contract stipulates that she will be awarded the title "Princess of Austrasia". This title is an old Batavian tradition for the crown prince or crown princess of Batavia.

Titles she would inherit from her mother: Duchess of Hazelwood, Countess of Maconvale, Lady in Jorvik. But after the divorce of her parents, only the title "Lady in Jorvik" is left.

Since the foundation of the Frankish Empire, Elisabeth Asara became the Imperial Princess of Francia.

One of the important connecting bridges in Helderbourgh Stadt is named after the princess: Elisabeth Asara Bridge.