Football has been one of the most popular sports in Calbion for a long time, however no professional league was established until after the formation of the Calbain state. In 2014, the first group of clubs participated in the inaugural Gynghrair Gyntaf, which saw Pentyre Dragons win its first title. Since then, the league has become a starting board for many clubs to reach some international recognition. In addition, the Gynghrair Gyntaf has been the first professional league for several young and talented players that have moved on to become internationally renowned. After Calbion expanded its territory in 1691, the number of teams was increased from 10 to 14 to include the stronger teams from the new Talaithau. 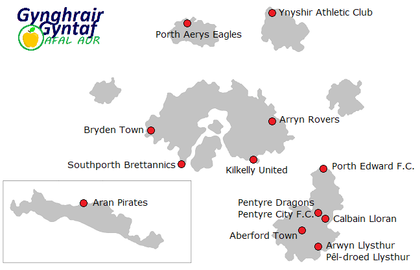 Locations of the clubs participating in the 2020-2021 season

The following clubs are participating in the 2020-2021 edition of the Gynghrair Gyntaf.