Arbor, officially the Emirate of Arbor in Barikalus (Arboric: إمارة أربور في باريكالوس), is a sovereign nation located in the eastern part of the continent of Apollonia. Strategically located on the Pound Strait, the country shares land borders with Çakaristan to the southwest and Lac Glacei to the north, and it shares the River Glacei with Hurmu, and shares maritime borders with Çakaristan and Nouvelle Alexandrie. The coast is formed by the Antican Sea on the southwest, the Pond Strait on the southeast and Strait of Pearls on the east. The country surrounds the Khalij al-Salam (Arboric: خليج السلام) in which the capital is located on an island. In the Strait of Pearls is the island of Mayurqa (Arboric: مايوركا) located.

The name "Arbor" was given to the archipelago during the Storish era. The name is Catologian for 'trees', referring to dense forestation on the islands. With the foundation of the Emirate that name was used for this new state. The name has been transliterated in the Arboric into 'arbur (أربور). 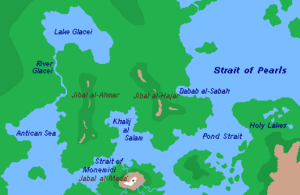