The team was founded in 2020 after Whales was founded as the successor state to the Natopian autonomous territory of the Two Martyrs, itself the successor of Greater Walstadt, Kujirashi-Walstadt and Walstadt. After first competing under the name of Walstadt in 2014's qualifiers, finishing bottom of their group, the team placed fourth in their 2015 qualifying group as the renamed Kujirashi-Walstadt. After being renamed to Greater Walstadt, a fourth-placed group finish in 2016's CiboTap qualifiers was followed by the team finishing bottom of their group in the subsequent year.

As the Two Martyrs, the team finished bottom of both their groups for CiboTap 2018 qualifying and 2019 World Cup qualifying, with the latter placement leading to a spot in the 2019 Emerging Nations Cup, where they finished third. The next year's CiboTap qualifiers saw another bottom-placed performance that led to a second Emerging Nations Cup appearance, with the team ultimately winning the trophy prior to being renamed once again to Whales. 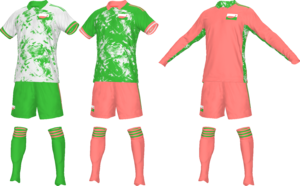 Whales hes used the following flag during the entirety of its FMF affiliation: