The team was founded in mid-2021 after the organization of Meckelnburgh Minor-League Soccer. 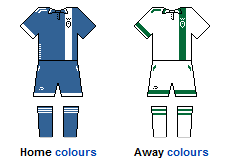 Used during the team's entire history.

Léonce Mathieu signed on as the first manager of the Meckelnburgh under-21 team in August 2021, previously managing the Boulonne Sealions.

Meckelnburgh under-21 has used the following flag during the entirety of its FMF affiliation: