Following the collapse of Alexandria the Command mostly concerned itself with the defence and security of the Two Martyrs (formerly Walstadt) and any allied units transiting the theatre of operations.

In 1675 a Northern Banner Group was established to facilitate the operations of Combined Joint Task Force 1675-1, a naval force assembled by the Black Legions of the Unified Governorates and the Natopian Defense Force assigned to conduct maritime security missions along the coast of Northern Cibola in the aftermath of the collapse of Saint-Antoine.

The command was reorganised in 1679 following the settlement of former Alexandrian territories by the new colonial demesne known as the Waffel Plains, and began to receive a steady stream of reinforcements following the withdrawal of Natopian garrisons from Normark and their replacement by Elwynnese forces. 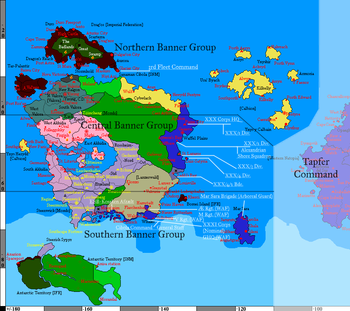 General overview of the Banner Group structure of Cibola Command during the Lanzerwaldian-Whaler War.