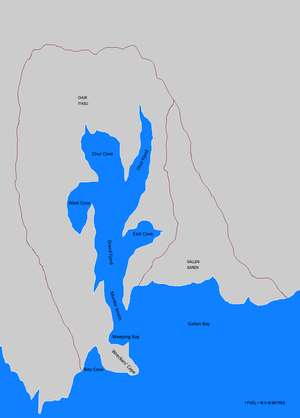 Chur (Saxon, from Machiavellian curia, "court"; Sangunese: 癒, Iyasu; "to heal", a translation of the Saxon homonym of the lordship kur-, "to heal") is a lordship in the province of Monovia (Whales, Natopia). The lordship is, since 1688, vested in Frederik Anders. A garrison for the lordship is provided by the ESB-Brunïakis-Afzælt.

The primary economic activity of Chur is sealing, with whalers in the employ of SATCo entering Chur Cove to massacre a third of the adult population each year after the conclusion of breeding season. In 1688 this side trade produced a harvest of 40,000 seal skins and 2,800 tons of elephant seal oil. The butchered carcasses of the seals are left to the natives of the enclave, where seal meat is devoured with gusto - being something of a local delicacy. Such meat as is not consumed in the glut of feasting that attends the arrival and departure of the whaling fleet is taken to the smokehouses that dot the shoreline, a third of which being stored to keep the natives fed during the lean months of winter while the remainder is typically exported to Tapfer where it is further processed by the foodstuffs division of the Honourable Company on that continent and marketed as pet food.

An N&H Leadership School was established at West Cove in Chur, consisting of a landing strip, seven turf-covered longhouses, and an enclosed area of 400 acres of gorse moorland, situated 368 metres from the ledge of North Cliff overlooking West Cove. Daytime flights are received at the Chur landing strip from Walstadt and Szandoh, while flights by unmarked aircraft northwards and out into the green are strictly nocturnal.

In late 1716 AN, with the closure of the southern Cibolan frontier, the Razzia based economy of Chur had declined to the point where the Honourable Company had begun to contemplate significant manpower reductions at the Chur cantonments.

All residents must be proficient in spoken and written Babkhi, Istvanistani and Lach, as part of their conditions of service.

40% of ESB personnel and dependents are reported to be of Lach ancestry, 20% are Tapferite, whilst the remainder are of Benacian extraction.

All servants and menials are locally engaged. The population of Chur is wholly Walstädter, with the Kujirashijin having departed for neighbouring Gallen. A safir was brought ashore from a shipwreck at Weeping Bay in 1692 and was returned alive to Hauptstadt Walstadt after badges of rank were recognised upon the creature's person. No safir is resident in Chur presently nor have any been reported to have done so historically. There is no evidence for captives from Barbary or Helderbourgh being held at Chur, as all native respondents gave their identity as Walstädter.

Residents of Gallen often complain that the men of Chur visit their lordship for their own recreation, seeking to spend the wage packets earned from the Honourable Company and SATCo. This has seen a growth in gambling, prostitution, and vice, as Gallen has become a boom town in its own right living off the excessive growth of Chur.

The explosive growth of the Lordship of Chur, combined with hostility from the Lordship of Gallen, has led to increased calls for an expansion into the Green to provide for the living space that Chur's growing population of dependents requires.

The population of Chur makes it the largest lordship in Whales by population.