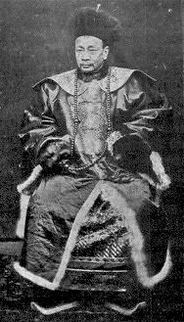 The Far Eastern Territory is an administrative subdivision in Jingdao and was once known as the Six Isles. Before 1669 AN, it was known as the Three Far Eastern Territories (consisting of the provinces of Nandao, Qundao and Dongdao). It's the sole Jingdaoese possession east of the province of Liao and is seen as cultural centre of the Jing in Apollonia. Because of its distance from the other parts of the realm, it has its own Viceroy who acts as representative of the Crown. The territory, which encompasses six isles is located in the Antican Sea and is from all sides surrounded by Krasnocoria, with which the inhabitants have amicable relations. Viceroy Tang Song is known to favour the establishment of a trading post in Shanbao, making it an economic centre in the region.

When the Jingdaoese people lost their home in Cibola around 1602 AN, the first large diaspora of the Jingdaoese began. Spread across the world, some were inspired by ancient scrolls (dating back to archives from Batavian clerics) which depicted Apollonia as the homestead of all Micrasian peoples. In these dire times, many Jing fell compelled to seek for a new home on the Apollonian continent. A local Myxosean King, Rollin the Conqueror, had united the six islands after the collapse of Antica, and welcomed the Jingdaoese with open arms. He was hailed by the Jing as someone who paved the Way and, after the king's psychological breakdown, someone who granted the lands to the Duchang Emperor in 1604 AN.

The Second Jingdaoese Empire was proclaimed with the isles as political centre.

Rollins Piek, presently known as Shanbao, served as capital of the Jing nation. On its height, this empire would encompass the territories around the Antican Sea (overlapping with current day Krasnocoria). Its strategical position made it a strong economical power, enabling it to fund foreign adventures and diplomatic missions to the A.R.S.E. which had broken away from the feudal regime in Shirekeep.

The island of Catavia was evacuated, as only a few inhabitants were allowed to remain: the whole island became a mausoleum in honour of the Heavenly Light. Monasteries were established, while impressive tombs were built to keep the mortal remains of the Emperor's safe.

The isles lost their importance after the successful integration of the Apollonian Republic into Jingdao. With most administrative offices being moved to the mainland and the subsequent loss of territories around the Antican Sea, the trade power of the region diminished. While remaining of important cultural and religious importance, the region could not regain its former political power.

Attempts by the latest administration under Viceroy Tang Song to open the isles up to trade with allied nations (Krasnocoria) have been met with mild success. The fervent opposition from the Gunbatsu to establish a trade port has stalled any progress and awakened fear among the population that this could only lead to the loss of culture and increase in criminality. Politically, the Gunbatsu has little to no influence in the Far East, and it's seen as a Kantai-ha stronghold.

The Far East is governed by a civil administration which is headed by a Viceroy who is appointed by the Heavenly Light.