From MicrasWiki
(Redirected from Project Newrad)
Jump to navigationJump to search

The Depths of Lapivril are a cluster of layered, sub-surface excavations beneath the Octavian Mountains of Benacia. Lapivril is located at extreme depth, where the subduction zone of the Central Benacian Tectonic Boundary projects a firm lip of the Micran crust down into the semi-molten aesthenosphere and allows for the construction of persistent habitations, fed by mineral resources from magmatic diapirs. The inhabitants of Lapivril, drawing upon their ancestral skillbase, have devised numerous technological solutions to support life in an environment of intense ambient heat and distance from the surface biome. These solutions, and the mechanisms of resource extraction and processing required to make them self-sufficient, consume such an immense proportion of labour and energy that the majority of Lapivril's population are occupied with their maintenance and operation, ironically preventing the technologically advanced realm from expanding much beyond subsistence scale.

Where small surpluses of productivity and time do emerge, they are invariably channelled toward the pursuits of scientific enquiry and esoteric rumination at the behest of the Troglodyti, an occluded order originating from the overhead realm of Kalgachia who initiated Lapivril's creation and made it their home, shielded from what their cosmology holds to be the perversions of the archonic host. While Lapivril nominally exists as a Kalgachi protectorate, its material dependence upon the latter has decreased over time although the flow of ideas and technology between the realms remains strong. 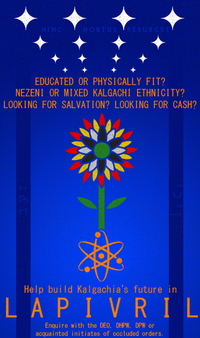 A recruitment poster for Project Newrad, usually seen in universities and technical schools.

The Lieutenancy of Lapivril was conceived in the 160s Anno Libertatis by adepts of the Troglodyti embedded in the research and development organs of Kalgachia's Directorate of Education and Outreach. As the decade wore on, they found themselves increasingly concerned that the incessant militarism of Kalgachia's immense neighbour Shireroth appeared to be escalating untramelled toward a psychotic threshold at which rational judgement would be abandoned, the deterrent effect of the highly optimised Kalgachi armed forces would evaporate, and no amount of expense in Shirerithian blood or treasure would be considered too great to finally act upon the Shirerithian leadership's oft-stated desire to exterminate the Kalgachi nation; moreover that dissent to the prevailing regime within Shireroth at that time had been effectively eradicated from public life and could no longer be counted upon to moderate even the most heinous excesses of the country's ideologically turgid leadership.

The Troglodyti looked askance at the assurances of the Kalgachi Church, Defence Force and Prefects that their respective armed forces could throw up and sustain a viable resistance to Shireroth's effectively infinite hordes of gravtanks, trained troops, chillingly well-motivated paramilitary death squads and a multi-layered surveillance capability so advanced as to be indistinguishable from godlike omniscience - at the very least, it was felt among Troglodyti that the damage incurred by such an invasion upon the moral integrity and social cohesion of Kalgachia would reduce its whole society over the long term to a hollow shell which, although possibly surviving in some form, would come to resemble a mere shadow of the plucky mountain culture which had been lovingly cultivated after the demise of Minarboria. In turn, according to the Troglodyti, this would pull Kalgachia from the grace and favour of the Garden Ketheric and leave it wide open to prompt annihilation - unless some new place of safety could be found to shelter the kernel of their untainted being while their assailants' unsustainable predationism was kept safely distant and allowed to burn itself out in a cannibalistic orgy.

While a minority view among the Kalgachi hierchthony, it held disproportionate weight due to the constitutional conditions of the time which mandated the Troglodyti to chair Kalgachia's ruling Council of Perfecti. thus, when they unilaterally began work on an underground national redoubt so deep and self-contained that it effectively constituted a seperate civilisation in the mould of the ancient PRH, the resources of the Kalgachi state began flowing toward it almost without particular protest. While the technical obstacles were judged by the Direatorate of Education and Outreach to be within Kalgachia's competence to overcome, they were nonetheless considered immense to the extent that their resolution would require the greatest expenditure in resources ever committed to a single Kalgachi capital project. The administrative setup and initial tunnelling was feasible enough - these began in earnest in 167 AL - but the development of a self-contained infrastructure was by far the greatest challenge, requiring the input of several government organs under Troglodyte guidance. The joint effort came to be named Project Newrad: allegedly a portmanteau of the words 'New', 'Ke'Najrad' the capital of the technologically-advanced Khaz Modani Empire of ancient Benacian fable, and 'Radium' referring to the granitic compositon of the local rock which would ultimately be crucial to the project's viability. 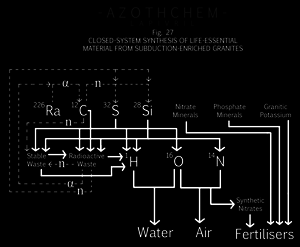 The processes required for Lapivril's life-support system are of marginal yield, scaled to viability by enormous amounts of geothermal power.

Project Newrad is made possible by Kalgachia's location along the Great Benacian Subduction, a tectonic boundary which forms the mountainous spine of the continent. The accompanying arc of magmatic diapirs liberated from the constraints of the Micran core provides two essential resources:

Project Newrad was commenced unofficially around 165 AL as a private initiative of the Troglodyti from an underground facility they maintained adjacent to Command Rhizome WESTNEST of the Kalgachi Defence Force, thought to lie somewhere between the cities of Jollity, Bergburg and Katarsis. Funding and resourcing was initially secured through Deep Services, a Troglodyte-administered unitary enterprise providing property maintenance and administrative services to low-output businesses of the Church of Kalgachia, in exchange for payment in Kalgarrand and reams of mined data about the Kalgachi economy in which the Troglodyti took an apparent interest. As its well-connected initiates embedded in the Directorate of the Tumultuous Wastes became involved in the project, it was decided to give over a proportion of the emergent chemical engineering technology to the manufacture of synthetic drugs which were sold on to narcotics traders operating in Kalgachia's anarchic near-abroad, filtering it through numerous criminal supply chains to the lucrative underground markets of Shireroth.

As the operation grew more ambitious it eventually drew the attention of the Prefects, Kalgachia's internal security service, whose reports down the chain of command eventually reached its representative on Kalgachia's ruling Council of Perfecti and allegedly led to a confrontation of the council's chairman, a Troglodyte by tradition who was broadly aware of the project but, for whatever reason, had neglected to inform his brethren about its recent acceleration. It was decided by the Council that the project would need to be brought under fuller state oversight, if only for the sake of it being properly resourced and conveying some of its benefits to the wider Kalgachi population. The Troglodyti, however, were most insistent that the incursion of the general population into its new underground territory would be prejudicial to its purpose. The Perfecti duly countered that such an elitist regime would make its resourcing by the Kalgachi population so unjustifiable as to be politically hazardous, and that it would have to be wholly limited to a 'Deep Private' recourcing model unless it devoted some of its capabilities to the material assistance of the surface society. The Troglodyti partially relented on the matter, reulting in a hybrid model whereby certain organs of Kalgachi state allotted expertise and specific resources to the project's initial buildout, picked up thereafter by the Troglodyti's 'off-book' assets. By 167 AL the underground spaces excavated for the project were granted territorial autonomy as the Lieutenancy of Lapivril, and responsibility for various aspects of its development fell into a recognisable pattern: 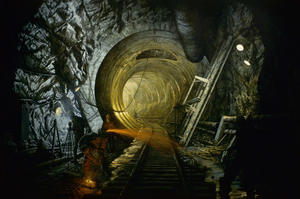 Those aspects of construction work done before the installation of air conditioning were arduous, uncomfortable and consequently slow.

The absence of other state organs in the project, most notably the populist Church and KDF, was unprecedented in Kalgachia's history and created a markedly different atmosphere from that nearer the surface, in which the usual allusions to staring down a host of beseiging archons in a state of vigilant distraction were reduced to a mere silent foundation in the minds of Project Newrad's participants as they became more concerned with the resolution of countless technical obstacles and a general emphasis on forging a new Kalgachi paradigm for its own sake, rather than the notion of reactive flight from the tumult of the surface world which inspired the project's original creation. This new and fearless mode of thinking was ultimately made possible by the safety of Lapivril's location beneath several kilometres of solid rock and the strict restriction on the number of its interfaces with the surface, built with easy demolition and concealment in mind; indeed the prospect of Lapivril's entire territory detaching itself from the surface and migrating around the lithosphere or even the upper mantle of Micras, consuming rock in its path and excreting in its wake like tunnelling worm, was not considered entirely ridiculous, being at times shamelessly advocated by the project's Nezeni participants whose Deep Singer ancestors were thought to have lived in just such a manner in ancient prehistory.

Such was the progressive divergence of Lapivril's small society from Kalgachi norms that the Council of Perfecti, increasingly bewildered by its physical and societal distance from the surface, declared it an autonomous Kalgachi protectorate in 216 AL.

The exact location and size of Lapivril is unknown but it is thought to be smaller than Jollity, Kalgachia's smallest surface Lieutenancy - perhaps no larger than a single city. Admission to Lapivril is tightly controlled and usually limited to authorised initiates of the Troglodyti, skilled scientists or engineers with a letter of invitation.

The amount of transit points between Lapivril and the surface is minimised and their exact locations are classified; some or all of them are thought to open into the triangle of underground railway tunnels which connect the Kalgachi cities of Jollity, Bergburg and Katarsis. Rumours of sinister arcane activities in these tunnels, along with the restless ghosts of several thousand Froyalanish labourers who died building them, tend to ward off the curious.