From MicrasWiki
(Redirected from New Aquitane)
Jump to navigationJump to search

Saint Christopher's (Martino: San Cristóbal), sometimes known as the Duchy of New Aquitane (Ducado de Nueva Aquitania), is a Senyan city and enclave in the Green of north-west Apollonia. Originally a Landish duchy (the duchy of New Aquitane) vested in Rashid Arsalani, it fell to the Green after Landingberg's collapse in 1548 AN, before being annexed by Natopia in 1624 on behalf of its duke.

In 1681 AN, Natopia transferred the territory to Senya through the Treaty of Lükanburg via a resolution of the Frenzy. Since then, the duke has no power whatsoever in Saint Christopher's. The treaty recognizes the right of the traditional successors to the duchy to use the title Duke/Duchess of New Aquitane, but this confers no other privilege upon them in Senyan law.

Istvanistani and Martino are the main language spoken here.

The people of New Aquitane is a deeply religious people, with the Church and See of Saint Christopher (as the church in New Aquitane is called) closely aligned in theology and rites of the Alexandrian church. During the time when barbarians horded the land of New Aquitane, Alexandrian missionaries, most of whom from San Martin, provided the spiritual as well as material support and guidance for the people. Churches were used as shelters during the sackings of cities and villages by barbarians and terrorists. The church is strong with the New Aquitanians.

Lately other religions have come to New Aquitane. With the incorporation of the duchy to Natopia, a Bovic chapel was established in Saint Christopher to cater for immigrants from Natopian Tapfer who come to work for in the civil service in New Aquitane.

Siseranism has a presence too. After a deal was signed with the Prince of Walstadt, Duke Jonathan erected a temple in honour of Sisera. It's an imposing building and includes what could best be described as a Siseran nunnery. Outside the temple grounds, Siseranism seems not to make its presence very loud (except that the temple can be seen all over Saint Christopher's).

Although there were originally some worries concerning how the strict atheistic policies of the Senyan state would impact upon this staunchly religious pocket of Apollonia, there have been few issues since the annexation, with Senya granting special religious permission to the locals.

Saint Christopher's was formally annexed by Senya in 1681 AN and was incorporated as part of the Northern Senyan region. Despite being an enclave of the green, the Senyan authorities began construction of an airfield to allow for goods to be transported to and from the city. The Senyan government required a 1 year transition period for schools to the Senyan curriculum, including ordering the closing down of Martino-language schools, though Istvanistani (known as English in Senya) schools were permitted to continue as English is one of Senya's two official languages.

Small scale protests ensued due to the closure of Martino language public institutions, however these were quelled in 1685 following the passing of the Martino language act, which saw Martino recognised as a "heritage" language which could be used within the city and surrounding villages on signs and in schools, so long as those schools also offered courses taught either Istvanistani or Senyan.

The city is not particularly well known for its sporting scene, especially compared to the rest of Senya. The city's football club, San Cristóbal CF, play in the Senyan League, and are notably the only Senyan professional club to carry a Martino language name. 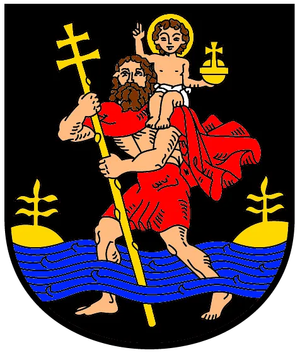 Coat of arms of the Duchess of New Aquitane

The order of succession for the position of Duke of New Aquitane is defined as follows: "Confirmed, that the right to succession to the Duchy of New Aquitane is vested in the issue, being the legitimate male and female descendants, of Nathaniel Andre Utas Ayreon-Kalirion of Waffel-Paine, former Emperor of Natopia, Prince, Duke of Cheshunt, etc, and should this line by extinguished, it shall revert to the legitmate male and female descendants of (Rashid Eskenderzadeh Arsalani) Ayreon, by the Grace of the Sacred Lady Elwynn, Kaiser of Shireroth, Emir of Sathrati, Prince of Hvalafell, Prince Andelarion, Duke of New Aquitane, Earl of Nes Farvel, Lord of Cape Farewell, Guardian of the Heart of Elwynn"