The Sack of Hamstadt is the name given to a series of raids to the Zandt capital city of Hamstadt by Monovian militants from the Green which resulted in the destruction of the city and the deaths of multiple thousands of civilians and law enforcement officers. The siege on the city also led to the ramping-up of the evacuation efforts in Zandarijn which had been organised and had already begun as part of Craitland's "Great Consolidation" policy.

Prior to the Monovian advance of the city, Zandarijn as a whole had been undergoing a period of depopulation as part of the mainland government's "Great Consolidation" policy, which involved the decolonisation of Craitland's number of overseas territories, of which Zandarijn was a longstanding one. In the short period of time before the organisation and undertaking of the evacuation of Zandt residents in order to resettle them on the Fifth Isle, Craitland had relinquished its sovereignty over Lakkvia to Hurmu via the Vesüha Accords, and New Vaduz and Incontinentia to Nouvelle Alexandrie partially through the Chetgavan Accords, leaving Zandarijn as the sole remaining Craitish possession.

With the resettlement of Zandt civilians already underway, the territory had become less populated and less protected, which gave greater allowance for ground attacks from insurgent forces. Hamstadt, although being the capital of Zandarijn, was located notably closer to the external border of the territory than its other major cities, and as such was targeted with relative ease by those militant Monovians from the nearby neighbouring Green lands.

In a historical context, there had been fluctuating ethnic tensions between Monovians and Zandts in southern Cibola since the mid-1520s, emerging after the founding of Zandarijn in previously Monovian land. Attempts at alleviating disharmony between the two peoples by the Craitish government and its Hammish counterpart, which subsequently acquired sovereignty over Monovia, such as the nations' co-hosting of the FMF World Cup, were made over the years with relative success. However, anti-Zandt sentiment rose among Monovians after the Hammish Civil War, which led to the collapse of the Hammish state in 1653 AN, and throughout the lifespan of its successor Caputia. Political stability in southern Cibola had also taken a hit after the collapse of Alexandria in 1650 AN, leaving the Monovians with little domestic or foreign support while Zandarijn enjoyed relative security. These factors are considered to have motivated the organisation of the attacks composing the sacking.

Attacks on the city began on the evening of 24.VIII.1699 AN, and continued for the following four nights. Violence initially erupted in the city's western suburbs before spreading into the city centre. Residences, businesses and landmarks were looted and vandalised during the attacks, with considerable incidents of arson being reported. Hamstadt's depleted law enforcement and emergency services numbers were not able to pacify the situation, tackle blazes nor treat casualties, which led to an escalation of damages and deaths as a result of the onslaught. Once the Monovian militia had established itself as the dominant presence in the city, further destruction occurred, including the demolition of important and prominent structures such as the Zandt parliament, Oude Markt buildings and the ZandArena stadium. 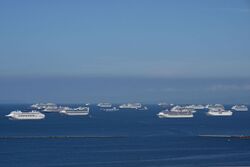 Evacuations via cruise ship from ports such as Prins Haven were increased after Hamstadt's sacking due to fears of a rapidly-advancing insurgency.

Those Hamstadt residents who were able to flee the carnage were transported to the coastal Zandt cities of Prins Haven, Oudorp and Nieuw Rotterdam with the intention of being evacuated to the Craitish mainland. Most evacuees departed from Prins Haven, historically Zandarijn's second most-populous settlement, with a large number of cruise ships employed to aid the mass-transportation of people. Conversely, the port of Oudorp, having received protection from neighbouring Sankt Ludwigshafen, became somewhat of a stronghold in the region and was used to house a number of the refugees as well as many existing residents, of which a substantial Ludwiggian minority existed already. The city would ultimately be agreed to come under Ludwiggian control as part of the withdrawal of the Craitish government's control of the territory in late 1699 AN, within an undertaking known as Operation Enduring Fellowship. The fallout from Operation Enduring Fellowship would lead to the outbreak of the Ludwiggian-Monovian War three years later in 1702 AN.

Of the Zandt residents who arrived on The Fifth Isle following evacuation, many were relocated to the Apollonian mainland after a couple of years to help with the ongoing rebuilding of Victoria, whose people were themselves recovering from the collapse of society due to the defeat of Stormark through the unravelling of the Vanic Web in 1685 AN. In 1702, the Victorian people, through the Declaration of Buthminster, restored their traditional royal house to the throne, with its legitimate heir Craitman VII, King of Craitland, becoming monarch. This new union allowed for greater collaboration between the two former allies, including the increased aid from Craitish and Zandt labourers to fortify the Victorian lands with the aim of bringing them under recognised Craitish control by 1703 AN.