The Declaration of Buthminster was an announcement made on behalf of the Victorian people on 16.XI.1702 AN which re-established the House of Brown as the kingdom's recognised royal family and inaugurated the eldest surviving legitimate heir of Victoria II, Craitman VII of Craitland, as king of Victoria. As its name suggests, the declaration was made in the city of Buthminster. 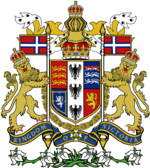 With the restoration of the Brown lineage, the traditional arms of Victoria last used under Victoria II were adopted once again.