From MicrasWiki
(Redirected from RB Dragonmoor)
Jump to navigationJump to search

RB Dragonmoor (Red Bear Dragonmoor) was a Dragonmoor-based football club which competed in the Florian Premier League. The Team was founded in June 2017 as Dragonmoor City but was then bought by energy drink company Red Bear for a fee of ❂2 billion, therefore renaming the team to RB Dragonmoor. Facilities were heavily invested and the team moved into a brand new stadium which has a capacity 60,000. Although Dragonmoor City FC won the first-ever edition of the Florian Premier League, financial difficulties led to the club's demise in 2018 and the franchise was succeeded by newly-established Dragonmoor FC.

The team was originally founded as Dragonmoor City in April 2017. It became instantly successful by winning the Florian Premier League Summer Series and therefore qualifying for the 2017–18 AEFA Champions' League Qualifying rounds. The club then received a formal bid of a whopping ❂2 billion from energy drink company, Red Bear. Which promised to improve the infrastructure of the club and football in the city of Dragonmoor. This however angered fans of the popular football club and many fan clubs left to form a breakaway football team called AFC Dragonmoor City which will compete in the Florian Regional Leagues. On the 9th July, the club announced plans to create a brand new stadium which will cost around ❂2 million and will have a capacity of 18,500. On the 9th June 2017, the club found issues in finding a stadium to play in for the AEFA Champions' League qualifiers as many clubs refused to let the team play at their stadiums. However, the club found a solution and was to play at the Apollo City Stadium in neighbouring Jingdao, but Red Bear Park finished unexpectedly early, however, a month later, many problems occurred as many errors in the infrastructure made most of the stadium unusable, therefore AEFA home matches will now be played at the Apollo City Stadium. On the 25th August, the club received a warning over league rules and was deducted 6 points and furthermore, they were given a transfer ban. On the 29th August 2017, RB Dragonmoor played their first match of their AEFA Champions' League campaign against Daocheng of Jingdao away from home. The match was ravaged by chaos from the Red Bears who overwhelmingly brought too many supporters causing too many delays in the Jingdaoese capital and the match was delayed by one hour, in the match itself RB Dragonmoor ended up losing the game 2-1. In the return leg, however, at home, RB Dragonmoor turned it around and won 2-1 however penalties were required and RB Dragonmoor won 6-5 on penalties in the process. In the second qualifying Round, RB Dragonmoor was given a tough draw against River Warriors side,FC Mahūti. RB Dragonmoor, however, was up for a task and beat the side 2-0 at home. In the return leg, RB Dragonmoor drew 1-1 meaning they won 3-1 on agg. and the team set up a tough tie against Eldeburgh. The team won the tie on penalties and became the first Florian side to qualify for the group stage. On 15th October, construction of Red Bear Park was fully completed. On 17 October 2017, it played its first-ever match at Red Bear Park but lost the game 2-1 against Lakkvian side Huyenkula 07 Sport. On the same day, Russel Jordan was sacked as manager due to poor form in the league and a dreadful start to the AEFA Champions League campaign. Draža Mihajlovic was appointed as his successor on the same day. On the 20th November. Draža Mihajlovic was sacked after accusations for leaking confidential information to Corian secret services.

The club was dissolved on 1 June 2018, with Dragonmoor FC succeeding its place in the Florian football system. 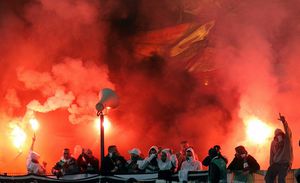 Red Bears during a league match against Celtic FC Oldhaven. 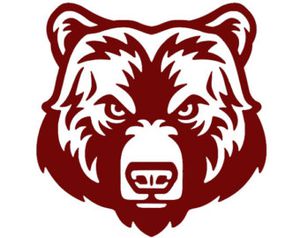 The official logo of the Red Bears.

After the purchase from Red Bear. Many ex-fans of Dragonmoor City left to form a breakaway club called AFC Dragonmoor City. However, most fans stayed to support the club. The largest fan club was called the Red Bears.

RB Dragonmoor was supplied by its own sportswear company.