Borussia Park (Formely Red Bear Park) is a stadium in Dragonmoor,Floria. It is the former home of Dragonmoor FC and Dragonmoor Raiders, replacing Dragonmoor Park, which was sold to rival club AFC Dragonmoor City. The construction of the stadium was delayed due to the war in Xhusor but construction restarted soon after. The stadium finished its first stage of construction on the 22nd July 2017. After the completion of the first stage, matches were able to be played. However, only one stand would be available to use. Construction was fully completed on 15th October 2017 and Huyenkula 07 Sport was the first opponent to play in the stadium, in the AEFA Champions' League. Dragonmoor FC would go on to play three seasons at the stadium before moving into Dragonmoor Stadium with both FFL stadiums in the city. It is now the home stadium of Union of Florian Microbreweries Sports Club who will start league play in 2022. 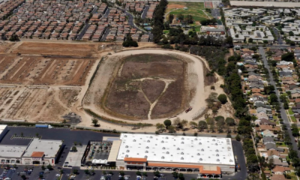 Red Bear Park at the start of construction
Retrieved from "https://micras.org/wiki/index.php?title=Borussia_Park&oldid=247872"
Categories: